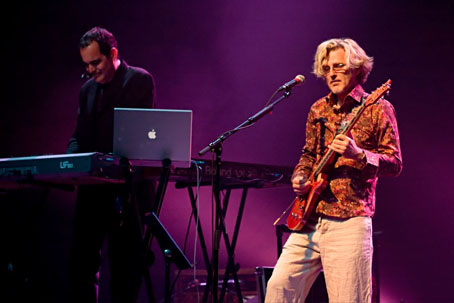 The idea of music being created over great distances, in piecemeal fashion by artists living in four separate locations around the globe, might seem inherently antithetical to the spirit of in-the-moment chemistry that defines most groups. But Transatlantic—a contemporary progressive rock super group featuring members of Spock's Beard (well, ex- member), Marillion, The Flower Kings and Dream Theater—released two strong albums in the early part of the decade, filled with lengthy epics rooted in (but expanding upon) classic groups like Yes, Genesis and Gentle Giant (not to mention their own work in other groups) and the occasional radio-friendly ballad. That the group didn't actually play the music together in one room until they rehearsed for its first tour, in support of SMPT.e (Radiant/Metal Blade, 2000), only makes the cohesive nature and spirited energy of that album and its follow-up, Bridge Across Forever (Radiant/Metal Blade, 2001), nothing short of a remarkable achievement.

When the group reformed after a seven-year hiatus to record The Whirlwind (Radiant/Metal Blade, 2009), the decision to do it together in the same location, over a marathon two weeks of writing and recording, resulted in a nearly 80-minute continuous suite that would have been impossible to accomplish any other way. Past material was more clearly based on an individual pen, with additional group assistance coming later. It's still easy to hear the more directly anthemic impact of keyboardist/singer/guitarist Neal Morse's post-Spock's Beard work in some parts and Flower Kings guitarist Roine Stolt's more symphonic contributions in others, but The Whirlwind feels more collective, where the whole truly exceeds the sum of its parts. Anticipation of experiencing that whole was clearly in the air when the doors opened at Montreal's Metropolis, 90 minutes before Transatlantic's April 21, 2010 performance. This was, after all, to be "An Evening With Transatlantic," and reports of its, well, epic shows—running in the range of three hours— were already starting to filter in on progressive rock boards around the internet.

Most groups would be content to perform such a demanding piece as The Whirlwind in its entirety, add a couple of encores and call it a night. But for the members of Transatlantic—in addition to Morse and Stolt, also featuring Dream Theater drummer/singer Mike Portnoy and Marillion bassist/vocalist Pete Trewevas—the unmistakable enjoyment of each others' company onstage was palpable from the moment they went on at 8:30PM and remained until the final notes some three-and-a-half hours later. With three full albums of material, there was plenty to choose from, and while the group couldn't perform it all, they managed to hit all the high points.

This is only the group's third tour in its on-again/off-again ten-year existence, so clearly a Transatlantic tour is as eagerly anticipated by its audience as it is its members. In addition to performing The Whirlwind, the group came back, after a 15-minute break, to deliver a second set almost as long as the first, including SMPT.e's complex "All of the Above," the power ballad "We All We Need Some Light" and Bridge's "Duel With the Devil" as a smoking closer, before returning for 40- minute encore featuring Bridge's ethereal title track—a soft, atmospheric duet by Morse and Stolt—and another half-hour mega-suite, "Stranger in Your Soul." Comparing the set—six pieces, with only two under 30 minutes—to Leonard Cohen's 2009 tour where, in the same amount of time, the iconic singer/songwriter performed 26 songs, places what Transatlantic is about in sharp perspective.

Not that Transatlantic should ever be compared to Leonard Cohen, though the kind of stamina demonstrated by both in their respective tours has been of, again, epic proportions. The Whirlwind consists of 12 sections, but numerous themes were reiterated in different contexts and came together in various permutations and combinations. The Montreal audience was clearly primed for the show, already well familiar with the album, as well as the rest of the group's discography. The crowd—ranging from young Dream Theater metalheads to aging progressive rockers who had hair back in the days of Peter Gabriel-era Genesis (when its theatrical lead singer didn't)—jumped instantly to its feet each time the group returned to one of the suite's defining, anthemic moments—cheering, screaming, arms pumped, Hook 'em Horns aplenty. It was hard to tell who had more energy—the audience, which remained energized and enthusiastic throughout the entire evening, or a group that came onstage like gangbusters and never ran out of steam. It was impossible not to be carried away by the collective enthusiasm, and was easy to understand why a group like this wants to take its music on the road.

In addition to sheer stamina, Transatlantic's music in a live setting is a testament to frightening technical skill—and memory. With constantly shifting meters, tempos and harmonic changes—and with knotty themes that feature all kinds of twisting and turning stops and starts—it was remarkable that the group managed to make it through any one of its epics, without the aid of charts or other guides, let alone the four lengthy suites performed over the course of the evening. It's no surprise that Transatlantic is one of the more successful contemporary prog groups in recent years. The performance was by no means absolutely perfect—Morse's voice occasionally ran out of steam in the upper register, while Stolt experienced some technical problems early in the first set that, thankfully, were quickly resolved—but that only made the group's remarkable prowess more human, more real.

Considering the length of most of its music, while there were plenty of solo features for everyone, they were short and well-integrated. No excessive 10-minutes drum solos, no extended guitar solos of Spinal Tap proportions. Instead, everything fit within the detailed constructs of the writing, as the spotlight shifted from player to player, and from singer to singer. On its first two albums, Morse was the primary vocalist, with Stolt running second. Transatlantic 2010 is a more egalitarian band; Morse still dominates, but Stolt's voice was heard more often, even assuming the lead on "We All Need Some Light," a song traditionally sung by Morse, its writer (though Stolt's version can be found on the bonus disc to the deluxe edition of SMPT.e). Those familiar with the work of Transatlantic's members in their own groups knows that Trewevas and Portnoy are not lead singers, but both received brief vocal spotlights. With the group expanded to a quintet by guitarist/keyboardist/percussionist/singer Daniel Gildenlow, there was also plenty of lush three-, four-and five-part harmony.

Gildenlow—playing towards the rear of the stage, but clearly as engaged as his fellow band mates—also made it possible for some of the studio recordings' additional overdubbed parts to be retained; but, like his band mates, he kicked the energy levels (and the volume—this show was loud) up. And by handling most of his acoustic guitar parts (with the exception of the 12-string on "We All Need Some Light"), Gildenlow freed Morse up to focus exclusively on keyboards. With two keyboards triggering everything from grand piano and Hammond organ to vintage Moog and Mellotron sounds, Morse—using a headset-style microphone so he was free to move around his keys unencumbered—exuded a relentless and charismatic positivism linked, no doubt, to his born-again status.

The primary writer for Spock's Beard's first incarnation, he left that group, in addition to Transatlantic, in 2002, and has since pursued a surprisingly compelling brand of Christian progressive rock, culminating in the recent triple-disc live album, So Many Roads (Radiant/Metal Blade, 2009). Despite the spiritual nature of Morse's writing in and out of Transatlantic, his refusal to proselytize has kept him more honest and readily accepted by those not necessarily sharing in his faith. That he's playing in this context with Portnoy—who, having recorded and performed in Morse's band over the past several years, was the subject of Morse's hidden "I'm a Heavy Metal Long-Haired Blue-Bearded Tatooed Jew" on Lifeline (Radiant/Metal Blade, 2008)—speaks volumes.

It's hard, in fact, to find a more disparate group of players on the surface: the born-again Morse; metal icon Portnoy; Swedish hippie Stolt; and effervescent but undeniably British Trewevas. And yet, they come together as such a cohesive unit that capitalizes on each member's individual strengths and an exhilarating collective chemistry. Rivaled only, perhaps, by Morse for onstage charisma, Portnoy was a clear hit with the audience, as he connected directly with his fans through eye contact, off-mike banter and showmanship that never compromised his muscular, polyrhythm-heavy playing.

Trewevas occupied his own space, playing with a classic Rickenbacker tone reminiscent of Yes' Chris Squire but more lithe and less plodding, in addition to triggering deep, visceral bass pedals like Genesis' Mike Rutherford. Less visually captivating than Morse and Portnoy, he nevertheless kept the energy up in his area of the stage, with the occasional leap into the air and a clear camaraderie with those around him, maintaining the group's infectiously optimistic vibe. Unlike the darker Marillion, with Transatlantic it's all smiles and laughter.

With all four players so well-matched instrumentally, it's tough to pick a favorite, but Stolt edged out his band mates by a narrow margin. With remarkable tonal control and a seemingly endless wellspring of ideas that went far beyond the range of most rock guitarists—even progressive rockers—Stolt was the most visually introspective performer, but he more than made up for it with solo-after-solo of focused invention. It's hard to think of another modern progressive player who fits the definition of "guitar god" better than Stolt.

In a performance that combined strong musicianship with engaging showmanship, a comfortable rapport with an audience that was familiar with the music and the musicians, and a set list that touched on its many strengths, Transatlantic's 2010 tour will undoubtedly go down as one of the best of the year. Proof that intelligent, epic-driven rock music with fingers in a wide range of musical styles is still in vogue, this music may not sell the millions it did during its heyday of the early 1970s, but there's clearly a groundswell of support for this kind of music—especially in Montreal, which has been a strong supporter of progressive rock since its inception—that simply could not have happened before the internet, where a global community has come together and made it possible for groups like this to continue recording and touring. As good as its studio efforts are, Transatlantic is clearly a group best experienced live; with live albums released after its first two tours early in the decade, there's every reason to hope another one will follow suit after the group finishes up its 23-date, 12-country Whirld Tour.