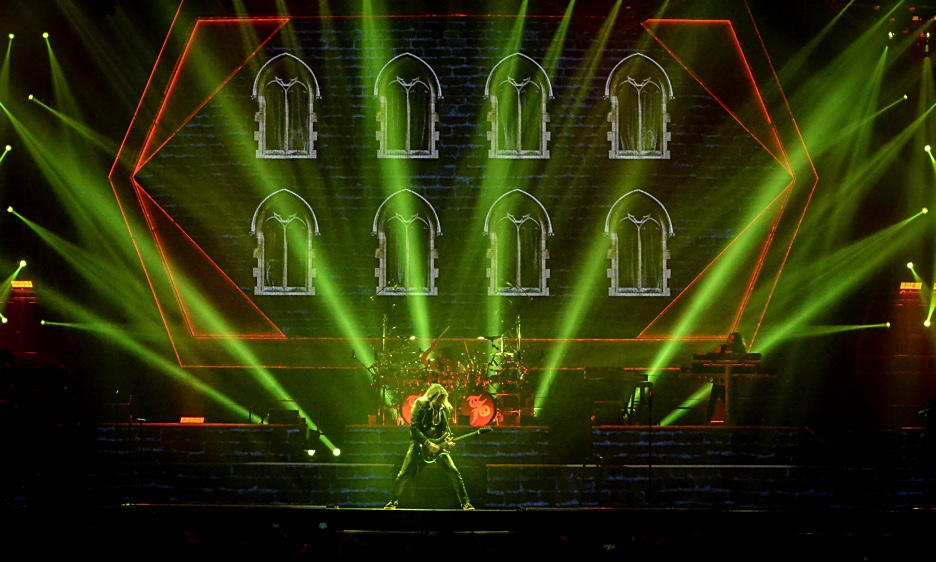 Celebrating its twentieth year on the road, Trans-Siberian Orchestra brightened the lives of a sold-out Nassau Coliseum crowd with a Christmas spectacular that warmed even the most hardened hearts.

Over the years, TSO has played for well over 100 million fans. The group has toured 80 cities, becoming so successful that there are now two different touring troops—one for each coast of the United States. In addition to touring the country and bringing joy to its fans, TSO also donates one dollar from every ticket sold to a local charity in each city they play.

The late composer, songwriter, and producer Paul O'Neill founded TSO in 1996 with the idea of marrying classical and rock music. He loved the music of Emerson, Lake & Palmer, Queen, and Yes and how it blended orchestral arrangements with a rock aesthetic, and adored the soaring vocals of The Temptations, The Four Tops, and similar groups. O'Neill recruited multi-instrumentalist Jon Oliva, guitarist Al Pitrelli, and keyboardist and co-producer Robert Kinkel to form the core of the project. His original concept was to create a number of rock operas, a Christmas trilogy, and some additional albums.

Over the length of its career, TSO has sold over ten million albums. Its debut CD, Christmas Eve and Other Stories (Lava/Atlantic, 1996), was the first installment of a Christmas-themed trilogy. In 1998, the band released the second part of the trilogy, The Christmas Attic (Lava/Atlantic), featuring "Christmas Canon," a take on Johann Pachelbel's Canon in D major with lyrics and new melodies. The trilogy's final installment, The Lost Christmas Eve (Lava/Atlantic, 2004), received a Gold certification from the Recording Industry Association of America just five weeks after its release.

Other TSO releases include Beethoven's Last Night (Warner Music Group, 2000), a rock opera telling the fictional story of the composer's last night on Earth and Mephistopheles coming to collect his soul; Night Castle (Lava Records, 2009); and Dreams of Fireflies (On a Christmas Night) (Lava Records, 2012). The group's sixth album, Letters From The Labrynth (Republic Records, 2015), is not a rock opera but a collection of songs on various subjects including bullying, banking, and the Berlin Wall. It was also the last to feature O'Neill before his passing in April 2017.

This concert on the Friday before Christmas drew a mixed bag of the Greatest Generation, Tweens, Millennials, Gen-Xers, Baby Boomers, and wide-eyed children. A number of the multi-generational audience members came decked out in their finest holiday sweaters. Some even wore special necklaces with blinking Christmas lights for their night out at Nassau Coliseum, which has added the NYCB Live moniker after its renovation (resulting in a name that takes longer to type or say than it does to watch the average sitcom).

As the crowd filtered into the sold-out arena, it was greeted with a huge stage set-up for the multimedia extravaganza. The performance began just after eight o'clock and was filled with lasers, pyrotechnics, smoke, fire, and a fantastic light show that made for a seemingly three-dimensional experience. Various scenes and settings were projected on a huge high-definition screen behind the band and onto moving platforms holding the band members.

The performance, which lasted well over two hours, opened with the charming and lovely "Who I Am," followed by an amazing "An Angel Came Down" and "O Come All Ye Faithful" segueing into "O Holy Night." Highlights of the concert included "Prince Of Peace," "First Snow," "A Mad Russian's Christmas," "Christmas Eve (Sarajevo 12/24)," "Old City Bar," "This Christmas Day," and "An Angel Returned." Other performances of note were "Handful of Rain," "Wizards in Winter" and "Can You Hear Me Now?" The show ended with powerful versions of "Believe," "Wish Liszt (Toy Shop Madness)," "Requiem (The Fifth)" and the reprise from "Christmas Eve (Sarajevo 12/24)."

These joyous performances brought smiles to the faces of each and every member of the audience. Following the bows, the lights came up and the still smiling and cheerful audience members made their way to "meet and greet" band members at the merchandise stand and in the parking lot.

As a difficult year comes to a close, the crowd was refreshed and energized (if only for this evening). Trans-Siberian Orchestra was able to deliver everything that makes the holiday season a time of peace and good tidings to all.