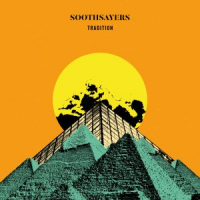 To describe London's Soothsayers as a group of jazz musicians who get together to play a blend of roots reggae and Afrobeat is true—but potentially misleading. It could suggest that the musicians are taking time out from serious music-making to engage in something more ephemeral, of lesser importance. The truth is contrariwise. First off, roots reggae and Afrobeat are as intrinsically profound as jazz. Second, although Soothsayers have a lot of fun doing what they do—along with their audiences, for the band is a red-hot live entity—they are wholly serious about their music and the socially engaged messages they communicate in their lyrics. The band was formed in 1998 by saxophonist and flautist Idris Rahman and trumpeter Robin Hopcraft, who remain co-leaders. The core group also includes longstanding members Julia Biel (vocals), Kishon Khan (keyboards), Patrick Hatchett (guitar), Kodjovi Kush (bass guitar) and Westley Joseph (drums). On Tradition, additional musicians include Dele Sosimi , one-time keyboard player with Fela Kuti's Egypt 80 and MD of Femi Kuti's Positive Force, baritone saxophonist Tamar Osborn, from Sosimi's magnificent London-based Afrobeat Orchestra, trombonist Harry Brown and vocalist Cornel Campbell. Tradition is number seven in a chain of consistently excellent Soothsayers albums, which began with Lost City (Red Earth) in 2000. Like its predecessors, it is a mixture of instrumental and vocal tracks, and is a characteristically inclusive London mash-up of reggae, dub, Afrobeat and jazz. It is all bound together with a strictly-roots vibe—in the 20 years Soothsayers has been in existence, fads and fashions have come and gone, and the band has continued unwaveringly along its chosen path. Stand-out tracks include the instrumental "Goodnight Rico," a tribute to the great Jamaican trombonist Rico Rodriguez, Julia Biel's transportingly soulful vocals on "Watching The Stars," Dele Sosimi's Orisha-summoning vocals on "Sleepwalking," and the deep dub of "Overcome." Also outstanding is the album's one cover song, a mostly instrumental arrangement of Bob Marley's "Natural Mystic," this time out given a classic Afrobeat groove. Rahman's flute on the track evokes his work with bassist Leon Brichard and Sons of Kemet drummer Tom Skinner in the spiritual-jazz trio Wildflower, whose self-released debut album was one of the pleasures of summer 2017. That leaves another half-dozen tracks and every one of those is a winner, too.