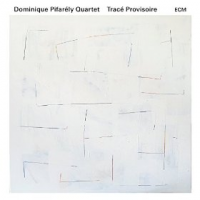 French violinist Dominique Pifarély—last heard solo on Time Before And Time After (ECM, 2015)—leads a quartet into that uncharted territory between improvisation and composition. The quartet was founded in the spring of 2014, but the players had many associations before that. Pifarély and double bassist BrunoChevillon have recorded together with clarinetist Louis Sclavis on Chine (Ida, 1987) and Acoustic Quartet (ECM, 1994). The violinist and drummer François Merville appeared on Sclavis' Dans la Nuit (ECM, 2000). Pianist Rayon makes his first ECM appearance here; Pifarély has worked with him in guitarist Marc Ducret's band. The instrumentation makes this look like a jazz quartet, but it's mostly only jazz in that space where free improvisation meets the New Music world.

So the opening "Le peuple effacé I" begins with a sparse, almost pointillistic texture. By the close it has worked up to a repetitive rhythmic riff, most likely the most "composed" part of the piece. The rest of the selections follow a similar pattern, as ideas, structural elements and themes are combined to give each one its own shape. "Tracé provisoire I" uses much the same blueprint, but this time the theme explodes out of the improvisation about halfway through, creating an even greater contrast—it's also one of the jazziest themes stylistically (and it recurs in Pt. 2). Just to mix things up, "Le peuple effacé II" begins with the theme (continuing on from where Pt. 1 left off), then dissolves into space.

The leader is clearly the lead voice in the ensemble, but Rayon's piano also gets a chance to shine. He begins "Le regard de Lenz" with a lyrical solo, and "Tracé provisoire II" features a spacious, abstract piano introduction, accompanied by sparse percussion. Here as elsewhere, Merville's beginnings in chamber music with composer/conductor Pierre Boulez and the Ensemble InterContemporain serve him well. The violin joins in, seemingly disconnected at first, then gradually the ensemble comes together. Chevillon's role on bass is also one of active accompanist rather than soloist—but he is responsible for a truly ominous bass drone in "Vague I," where he definitely makes an impression.

Dominique Pifarély's "provisional traces" are sometimes elusive, but they make far more than a trace impression. He and his band move through these textures and themes with assurance and grace.