By GLENN ASTARITA
August 19, 2013
Sign in to view read count
Track review of "Softly Her Tower Crumbled in the Sweet Silent Sun." 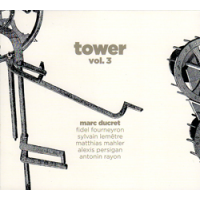 Each one of French guitarist Marc Ducret's Tower series albums has featured different lineups and instrumentation. With Tower vol. 3, he employs a three-man trombone attack with percussion and piano performers; as stated in the album liners, the band "plays comments on the music already played." Therefore, the musicians redevelop and dissect previous works appearing on the first two volumes. At times polytonal via the divergent instrumentation mix, the trombonists' powerful choruses supply interesting contrasts as the band takes on a malleable persona during certain movements. Ducret's signature off-kilter, distortion-laced phrasings and animated single- note lines often steer the ship.

The album closer, "Softly Her Tower Crumbled in the Sweet Silent Sun," commences with a Philip Glass-type circular movement, yet perhaps not as minimalistic in scope. Here, the artists punctuate the main theme, leading to several bars of linear and contrapuntal choruses. Add Antonin Rayon's brawny piano chords and a sense of urgency takes precedence. However, the group shifts the dynamic into a quiet and capacious bridge section with long gaps between notes. Followed by warm horn parts, the dense and probing characteristics give way to soft variations of the opening theme.

The ensemble creates mood-evoking subplots and disparate viewpoints amid cyclical re-engineering processes, closing it out on a temperate note. Indeed, this three-volume series has been a major source of interest for Ducret's fan base, and deservedly so. But according to the press release, this album could denote the final installment of the Tower series.