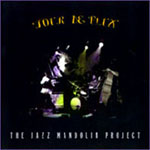 "The future belongs to musicians willing to explore timbre in terms of new combinations of instruments that are not standard." So said jazz saxophonist and owner of Postcard Records Ralph Simon in a December 1997 JazzTimes article about the future of jazz.

If Simon is right — and I believe he is — the future belongs to people like Jamie Masefield, leader of the Jazz Mandolin Project. Aside from Dave Grisman and Sam Bush — talented musicians whose sensibilities are as much bluegrass as jazz — I'm hard pressed to think of a single mandolin player in jazz. Maybe that's why this release from Vermont mandolinist Masefield and his two cohorts seems so vital. The mandolin is a very rhythmic instrument, and in a trio setting with drums and upright base, Masefield spawns some terrifically earthy music.

The Jazz Mandolin Project's debut CD was a stiff fusion effort, but this sophomore release boasts a new rhythm section and a more global outlook. Similar to Bela Fleck and the Flecktones, JMP adopts a free-sounding approach that incorporates world rhythms, bluegrass and modern jazz. Although the band goes mostly acoustic, the energy level here is as intense as any fusion ensemble's.

Tour De Flux will also appeal to rock fans, in part because the drummer is John Fishman, better know as the timekeeper for the wildly popular rock band Phish. Masefield and Fishman are old college buddies from the University of Vermont, and the latter's schedule enabled him to join JMP on a temporary basis after Manfield's former bandmates departed. Fishman should open some eyes with his jazzy drumming. The man clearly knows how to swing, and he does so with an unfettered exuberance that few rhythm makers can match.

Bassist Chris Dahlgren (formerly with Mike Stern) is an equally dynamic force. But this is mostly Masefield's show, and his picking sounds far more imaginative here than on his band’s debut. Whether strumming atonal chords on "Chapeau" or plucking languid bluesy licks on the orginal hymn "Boodha," Masefield takes the mandolin to places it's never been before.

Highlights among the eight tracks include "Flux," a calypso track that builds to a heady climax with some ferocious strumming by Masefield. "Clip" is an African-influenced improvisation that showcases some great bass work by Dahlgren, who put paper clips on his strings to produce the track's earthy sound. Dahlgren's composition "Bodha" is the most melodic track on the album. The bassist also wrote "Good N Plenty," a funky tune with a New Orleans feel. "Nimbus" really rocks out and features a blazing solo by Masefield.

Jamie Masefield has introduced a new instrument to the jazz world, and his band plays with a fire and a looseness that's infectious. Tour De Flux is a free and original collection that deserves a wide audience.

If the opportunity presents itself, I recommend you catch JMP in concert. I saw them at a jazz fest a short time ago, and they were a real crowd pleaser.