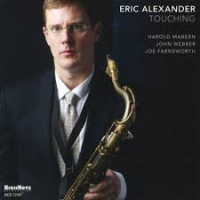 Tenor saxophonist Eric Alexander has chosen an intriguing title for his latest recording on HighNote Records, as Touching can not only be used as a verb or an adjective, whose meanings differ widely, but in this case is also a blues (by pianist Bobby Lyle), the opening salvo in an album of ballads and blues that lays bare Alexander's warmer side. For those who've grown accustomed to the tenor virtuoso's formidable technique and quicksilver phrases, this may come as a revelation. Even though best known for up-tempo skirmishes Alexander has always been as comfortable among ballads as he is with barn-burners, and proves to be as resourceful and interesting in a chillier climate as he is in the tropics.

To steer away from producing just another "ballad album," Alexander and pianist / mentor / colleague Harold Mabern hand-picked a list of songs that, with one exception, are rarely if ever performed by jazz artists. The exception is John Coltrane's soulful "Central Park West," whose contrast here is provided by Alexander's tenor sax, as opposed to Coltrane's soprano. Besides "Touching," the session embodies themes by Michael Jackson ("Gone Too Soon"), Michel Legrand ("The Way She Makes Me Feel"), the R&B group the Chi-Lites ("Oh Girl"), pop songs associated with Nat King Cole ("Dinner for One Please, James"), Frank Sinatra ("The September of My Years") and one standard, Jimmy Dorsey's "I'm Glad There Is You."

Even on slower themes, Alexander's nimble fingers aren't entirely missing in action, and he designs some intricate dance moves through "Central Park" and on "I'm Glad There Is You" (which is further enhanced by Mabern's playful piano). Mabern, who solos adeptly throughout, plays the melodica on the front and back ends of "Oh Girl," which closes the album with a fade. While Alexander and Mabern are a splendid duo, this is a quartet date, and it couldn't work without the solid groundwork of bassist John Webber and drummer Joe Farnsworth, who with Mabern have been members of Alexander's working group for roughly twenty years. They lend their indispensable support on all but one track, "Dinner for One Please, James."

While Touching is an explicit departure from Alexander's usual modus operandi, it is one that he and his companions embrace without pause, and there is an abundance of charming music here, further enhanced by the engineering skills of one of the masters, Rudy Van Gelder.

Touching; Gone Too Soon; The Way She Makes Me Feel; Dinner for One Please, James; Central Park West; I’m Glad There Is You; The September of My Years; Oh Girl.