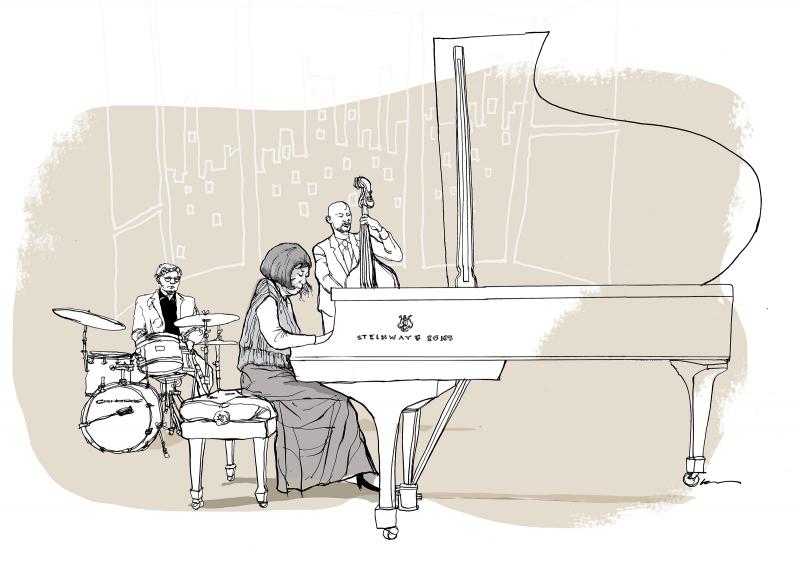 The momentum of the Akiyoshi's tiny frame nearly tipped her off her piano seat and she ended the tune with a girlish giggle.

At 87, the brilliant pianist/bandleader/composer Toshiko Akiyoshi knows by now what works for her and what doesn't. As she ambled onto the stage at Dizzy's Club Coca Cola at Lincoln Center on a warm Sunday evening as part of the club's Lessons From Our Masters series the still vibrant musician joked with the crowd about her advanced age with a pleasing mixture of impishness and a kind of focused glee. Akiyoshi casually rules the roost as only a seasoned veteran could. Her trio, featuring Steve Whipple on bass and the drummer Tim Horner were out of sight for the first number as she played an unidentified instrumental that served as a warm-up. She played fast and loose, before beckoning the other members of her band to the stage. After a brief anecdote about how as a young pianist she didn't appreciate the complex chord progressions Dizzy Gillespie infused into his compositions, the three musicians launched into a swinging version of the trumpet master's "Anthropology."

A great deal of the charm of the evening indeed turned out to be the great pianist's introductory notes before each number. Akiyoshi reminisced how she was discovered by the legendary Oscar Peterson in the Ginza, a district of Tokyo when she was 23, in 1952. Peterson was on tour with great jazz producer Norman Granz and convinced him to record the then young musician. With this, the trio embraced a lively version of "Polka Dots And Moonbeams," featuring an able bass solo by Whipple. Concluding, the nimble Akiyoshi played a rolling run down the keys and the momentum of the Akiyoshi's tiny frame nearly tipped her off her piano seat and she completed the tune with a girlish giggle.

The lighthearted evening ended in a slightly different tone than it began as Akiyoshi told the story about how she was commissioned to write a suite of music in tribute to the bombing of Hiroshima (which became "Rising From The Abyss") the concluding composition of which, "Wishing Peace," she described as a "hopeful tune." "I wasn't sure if I was capable of writing about such a momentous event," she remembered. "But somehow by depicting and element of hope, I could felt I could do it."

It was fitting end, as one hopes that Akiyoshi, the great musician herself, will be with us a long, long time.