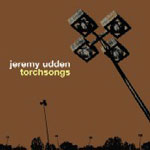 Saxophonist Jeremy Udden brought his sextet to Cornelia Street Café recently in support of his debut disc, Torchsongs, comprised mostly of his originals that blend straight-ahead themes laced with jazz/rock influences. Udden displayed a soft yet sure touch on alto (he plays soprano on the disc, too, but didn't pick up the second horn at the show), and his originals provided solid melodic opportunities for the band members to build on.

In a sense, the live performance allowed the band to complete some unfinished business. On Torchsongs, "Eternal Flame fades out as guitarist Ben Monder is playing a blistering solo, leaving the song with a case of something like McLaughlin interruptus. On the bandstand, however, Monder's unbound guitar growled and scratched as he razed the boundaries of the arrangement, splashing color all around like Jackson Pollock at a canvas.

On Steve Lacy's "Blinks the septet stretched out by playing with a wealth of texture and invention. Fender Rhodes player Leo Genovese, drummer Ziv Ravitz and bassist Garth Stevenson were excellent; Monder made his ax purr like an Indy car, and Udden played his most exploratory and challenging choruses of the evening.

Tunes like "Every Step and "Tut Muffin skirt the edges of fusion via Genovese's Rhodes stylings, Monder's fiery guitar and Ravitz's percussive underpinnings. At the other extreme, Bob Brookmeyer's world-weary trombone waltzes nicely with Udden's soprano on "Marin. Genovese's impassioned playing on "Fish Lake gives the tune a Bad Plus kind of tension, whereas Udden, Stevenson and Ravitz team up on "Loaded for one of the most dynamic collaborations on the disc.