By IAN PATTERSON
October 20, 2014
Sign in to view read count 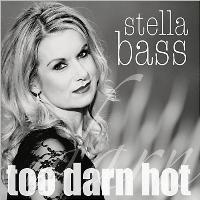 Singer Stella Bass is a stalwart of Dublin's live music scene, leading small jazz ensembles and collaborating with the HotHouse Big Band and the Dublin City Jazz Orchestra. Bass's debut jazz recording follows Smoke and Sound (Self Produced 2010), her cabaret tribute to Kurt Weil, Bertold Brech, Marlene Dietrich et al. In the main, Too Darn Hot sees Bass mine the jazz standards of the 1930s and 1940s, repertoire she's polished every Sunday for years in Dublin's chic Cafe en Seine. To stand out in a market awash with standards recordings requires something special and Bass, with her beguiling voice, comes fairly close. Whilst this set is unlikely to generate excitement amongst fans of more contemporary jazz there's no denying Bass's qualities as a singer and interpreter.

Classically trained, Bass's technical chops are evident from the first notes of Jerome Kern/Oscar Hammerstein's "All The Things You Are"; more importantly, her voice possesses soul, swing and pizzazz. Noteworthy too, are the arrangements of pianist Phil Ware, whose deft use of space and dynamics frame Bass's performances beautifully while enabling the excellent supporting cast to shine.

Bass has assembled some of Dublin's finest jazz musicians and they do her proud; guitarist Hugh Buckley impresses at slow tempos---as on the Kern/Hammerstein tune—and equally, when the band is swinging, as on Cole Porter's "Too Darn Hot." Trumpeter Danny Healy uncorks a gem of a solo on Jack Segal/Marvin Fischer's "I Keep Going Back to Joe's," providing sympathetic support to Bass's gently bluesy delivery. On Manning Sherwin/Eric Mascwitz's ballad "A Nightingale Sang in Berkeley Square," tenor saxophonist Robert Geraghty and Buckley's understated lyricism underscores Bass's nuanced delivery.

The leader injects a little fun with "Frim Fram Sauce," Redd Evans/Joe Ricardel novelty song popularized by the Nat King Cole Trio. Despite the frivolous lyrics, this old-fashioned swinger has endured, from Ella Fitzgerald/Louis Armstrong to Diana Krall half a century later. Ware's arrangement for trumpet, saxophones and Karl Ronan's trombone adds little-big band luster to Joseph 'Kansas Joe' McCoy's blues tune "Why Don't You Do Right?" Bass would probably settle for a fraction of the million copies that Peggy Lee and Benny Goodman's version shifted in 1942.

Bass also convinces on contemporary fare. On Robert Palmer's "Aeroplane" her poignant delivery and Buckley's emotive intervention combine to eclipse the original. Amy Winehouse's perfect retro-pop tune "Back to Black" is slowed down and artfully rearranged for horns; the rhythm section of Ware, bassist Nev Lloyd and drummer Dominic Mullan bring a subtle jazz sensibility to both tracks. Bass provides another highlight with Bruno Martino/Bruno Brighetti's "Estate," typically sung as a bossa nova since Joao Gilberto popularized the song; Bass instead sticks—convincingly—to the original Italian version in a compelling duet with Ware.

Hoagy Carmichael/Ned Washington's 'The Nearness of You," Ramsey McLean/Marc Shaiman's breezy "A Wink and a Smile" and Sonny Burke/Paul Francis Webster's sultry, late-night blues "Black Coffee" round out an enjoyable set. Too Darn Hot just confirms what jazz aficionados in Dublin already know—Bass is a class act.

All the Things You Are; I Keep Going Back to Joe’s; Too Darn Hot; Aeroplane; A Nightingale Sang in Berkeley Square; Back to Black; The Frim Fram Sauce; The Nearness Of You; Why Don’t You Do Right?; Estate; A Wink and a Smile; Black Coffee.