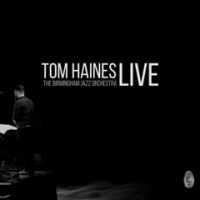 Tom Haines, whose album with the Birmingham Jazz Orchestra (that's Birmingham as in England, not Alabama) was indeed recorded live at the 2016 Stratford Jazz Festival, is a composer / arranger of the first rank—and has the awards to prove it. Of the five selections on Tom Haines Live, three have won awards for composing and / or arranging while a fourth, "Strange Utopia," came close, earning runner-up honors at the 2016 European Big Band Composers Competition.

The melodious and well-knit "Yitzoid," which leads off, was the winner in 2015 of Italy's 28th Concorso per Orchestra Jazz Composizioni Originali. The esoteric "Mystery Dog (Mr. E Dog)" took first place in the inaugural Eddie Harvey Jazz Arranger of the Year Awards in 2014, and the percussive finale, "Whistleblower," won the Duvel Jazz Award and Bose Audience Award at the Brussels Jazz Orchestra's International Composition Contest in 2013. None of this, of course, ensures that a particular listener may find the music to his or her liking. Haines' compositions abide securely in the realm of the avant-garde, which may or may not be in accord with one's musical comprehension or preference.

Whatever the case, one premise that can't be argued is that Haines' often cryptic themes test the orchestra's mettle and the BJO steadfastly rises to the occasion. There's no room for errors in a live recording, so the orchestra doesn't make any. The ensemble is sharp and synchronous, the rhythm section alert and responsive. One weak point: while all of Haines's awards are listed, none of the soloists is. A second is that, for reasons unknown, audience reaction after each number has been erased, although applause can be heard during the course of the performance. The warm and even-tempered "Remembrance," written in 2009 and dedicated to Eric Haines Sr. (Tom's dad?) is the only non-award-winning song, while "Strange Utopia" spotlights vocalist Rosie Harris. In sum, a well-designed and neatly performed concert that should greatly please those whose mind-set leans toward the contemporary.