By MIKE PERCIACCANTE
May 14, 2009
Sign in to view read count 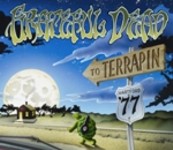 Though Jerry Garcia has long passed into the great beyond, The Grateful Dead and its record labels have continued to dig deep into the vaults to release high-quality live concert performances. Between the Dick's Picks series and the other legendary shows that are finally seeing a proper re-mastered release, there is always a new Dead recording on the horizon. To Terrapin: May 28, 1977 Hartford, CT is one such release. 1977 was a simpler time. Yes, change was in the musical air as punk had made inroads in England as well as in the U.S., but to The Grateful Dead and its fans, 1977 was the year that Terrapin Station (Arista), the first studio record since 1975's Blues For Allah (Grateful Dead Records), was released.

In terms of creativity, The Dead was at its peak. Terrapin Station, the first release for Arista Records, featured the what are now classic Dead tunes—"Estimated Prophet," "Passenger," the title track, and the band's take on "Dancing In The Street." In May of 1977, the band was preparing for the late July release of the album. It was also coming to the end of a 26-city/37-day tour. This three-CD set was recorded on the closing night of the Spring tour at the Hartford Civic Center. While tapes of this show have circulated for many years, this is the first official release of the historic and special performance.

This show has become legendary among Deadheads as it not only features "Sugaree" in all of its 20-minute, drawn-out glory, an amazing version of "Candyman," a laid-back performance of "Bertha," "Jack Straw," "Row Jimmy," as well as 10-minute versions of both "Tennessee Jed" and "Wharf Rat." Alongside these long-standing Dead staples, the band seamlessly integrated the best tracks from (what was at the time) its new album into the set. Weir's reggae-influenced "Estimated Prophet" and the Garcia/Hunter composition "Terrapin Station" served as bookends to an 11-minute monster version of "Playing In The Band" and were all performed in their extended jam-band glory. The band also delivered a hot version of the traditional gospel tune "Samson and Delilah" and a rocking version of Phil Lesh's "Passenger" from the soon-to-be-released Terrapin LP. The final tracks on this deluxe offering are a balls-to-the wall version of Weir's "One More Saturday Night" and a driving, flawless "U.S. Blues."

The playing is tight, energetic and intense. Although the songs occasionally get experimental and exploratory, the band is in complete control—each member is completely in tune with the others. This previously unreleased collection is presented in HDCD and was mastered from the original two-track analog tapes.