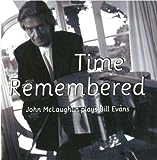 John McLaughlin has always been a huge fan of the late jazz pianist Bill Evans. He tells fondly of attending a show with Dave Liebman in which Evans went beyond brilliant. He also sadly relates the story that Evans had invited him to his house to play, but the pianist died before it could happen.

Evans brought a classical touch to the keys. He created a sound that was pure and strong, but delicate as well. Although he went on to work in solo and trio formats, he remains best known for his collaborations with Miles Davis. He co-wrote, although this is often in dispute, the classic "Blue in Green" from Davis’ classic quintet recording Kind of Blue. But he also composed, without dispute, two of the most beautiful melodies ever written, “Very Early” and “Waltz for Debby”. Evans remains one of the most influential jazz piano players of the last 50 years. (Be sure to check out pianist Mitchel Forman’s Then and Now: A Tribute to Bill Evans for a pianist’s take on the master's music.)

John McLaughlin recorded this tribute to Bill Evans in 1993, with his acoustic guitar backed by the acoustic guitars of the Aighetta Quartet and the acoustic bass of Yan Maresz. McLaughlin plays the head arrangements of Evans’ tunes, adding his own improvisational approach during solos. He wrote out the pieces for the Quartet and Marasz, and the highly reverberant results sound more like a European classical lullaby than jazz. But, as always, it's impossible to box McLaughlin’s music in with an oversimplification. No ordinary lullabies can contain the energy of some of these guitar runs. But the overall effect of the music is gentle and soothing, no matter how intricate or powerful it may be at times. Time Remembered is by far McLaughlin’s most romantic record.

Many critics did not like McLaughlin's choice to honor Evans in this way. They expressed dissatisfaction with the high reverb he used on the recording. On another front, some were disappointed simply with his style of playing. There was the question of whether the guitar was an appropriate instrument with which to honor Evans. Others believed McLaughlin had strayed too far from the jazz world in interpreting Bill Evans, an unorthodox jazz player who fashioned a style that contained a somewhat fragile classicism.

But as we all know, the critics sometimes miss the point. A bit of time spent reading the liner notes might have helped out. McLaughlin did see Evans' compositions as classical. He approached them in that manner and had every intention of making a truly romantic album. McLaughlin has always defied labels. He does fit most comfortably in the jazz idiom, but that placement is only out of convenience. You would think by now that most people would understand that he plays what he wants to play, when he wants to play it.

Time Remembered is a beautiful and fully realized tribute. The sound is full and rich, and the playing is strong and forthright all around. McLaughlin’s soloing is fluid, occasionally too dense, but never misdirected. All of the pieces are worthwhile, but two tunes are especially memorable. “Very Early,” also covered by McLaughlin using overdubs on Belo Horizonte , is simply timeless. I do favor the Time Remembered version. The most outstanding performance on the album is “Waltz for Debby,” which deserves repeated play. It is a wondrous composition, and McLaughlin and crew squeeze every little bit of emotion from it. This performance belongs in a very expensive music box. (Yes, I know. You can't put McLaughlin's music in a box.)

So what if your mother or girlfriend likes this album. That doesn’t diminish the complexity of the music or the skill of the musicians interpreting it. It was a challenge and a great risk for McLaughlin to tackle Evans' music in this way. In the process, he created a testament that will stand the test of time and changing fancies. This same group is slated to appear on McLaughlin's next release, which is being recorded as I speak. I assume that once again the group will do justice to jazz standards. Sometimes beauty just for beauty’s sake is all that's needed to sate the appetite.