By James Nadal
February 1, 2015
Sign in to view read count 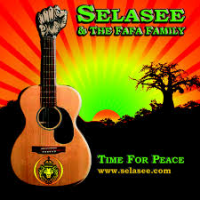 West African palm wine music, by the 1920's, was morphed into highlife in the country of Ghana —becoming the country's most popular and identifiable genre—and is the core substance of Time For Peace. Led by Ghanian native Selasee Atiase, now residing in America, The FaFa Family delivers roots reggae inflected with a soft undercurrent of highlife, and heartfelt inspiration of gospel and soul.

Prepared with a strong music background and acknowledged as a gospel singer back in his homeland of Ghana, Selasee has been around long enough in reggae circles to have released two previous records, "Run," in 2005, and "African Gate," in 2009. If third time is the charm, this could be the one that garners him recognition for his efforts.

Having the bassist and musical director for the legendary Wailers, Aston "Familyman" Barrett, as the producer and mentor on the record was a major advantage. His experience and expertise are evident starting with the title track on which he plays bass. Selasee expresses naturally and comfortably the positive vibrations which are prevalent and essential in the reggae message, and have become the genres characteristic emotion.

In an obvious homage to his homeland, "Mama Africa" "Stop The Rain," and especially "Which One," are pure African, the latter complete with an afro-beat pattern and accelerated tempo. But the pulsing Caribbean rhythm groove is foremost in "The Love," "Your Life In My Life," "Baby Sister," and "Like The Water," which is an easygoing float downstream.

Reggae, as many genres, has gone through its ups and downs in popularity and has been affected by other styles of music from rap to techno, but the classic roots reggae with its Rastafari connotation most identified with Bob Marley, has always been the standard by which genuine artists of the genre are measured. Selasee, by choice adheres to this tradition, and has captured the spirit that this music represents and upholds. As the title implies, Time For Peace, is music created on the golden rule, hopes for a better world, and peace on earth —who can beat that.

Time For Peace; Fly Away; Stop the Rain; Mama Africa; Glory Days; The Love; Which One; Your Life In My Life; Baby Sister; Like The Water; Plant A Seed; Yes I know.

About Selasee & The FaFa Family