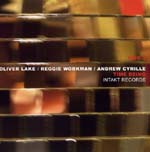 These three men have been working together for some time, and the more time passes, the more obvious it becomes that they should go on doing so. If some list of arbitrary criteria that makes for stimulating improvised music were to be written up, these three would score highly. They display individual expression in abundance within a group context, for example, while it seems to be the case that these men bring their wealth of musical experience to bear on whatever they do out of the force of habit.

Oliver Lake has inherited Eric Dolphy's mercurial phrasing, particularly on the alto sax, and his rate of musical development is such that he has long since subsumed it within his own instrumental personality. Andrew Cyrille has a knack for evoking both space and density in his drumming, and Reggie Workman is as alert to the needs of the music as he has ever been. As such, to hear them grooving on the out-of-kilter likes of Lake's "Lope" is to hear in less than five minutes both the earthiness and the grandeur to which this music can aspire.

Andrew Cyrille has for years been proving himself a rare entity: a drummer who is also a composer of distinction; and on "Tight Rope" there is further evidence of this, particularly when the other players are so alert both to the nuances of his lines and the individuality of his work behind the kit. The key element of give and take that's a cornerstone of this music is here in abundance, too.

All three men are also highly appreciative of instrumental colour and how to deploy it, and they prove as much on the group composition "Equilateral," where their conceptions of space and how to use it are much in evidence.

In the midst of all the derivative stuff, thankfully there is still potent music like this, and as a model of individual and group expression it offers nothing less than a working definition.

A Chase; Medea; Tight Rope; Equilateral; Lope; Time Was; Playing For Keeps; Given (The Whirlwind); Time Being; Special People.