Evan Parker / Seymour Wright: Tie the Stone to the Wheel 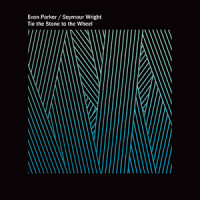 The five tracks on Tie the Stone to the Wheel were recorded at two duo gigs which saxophonists Evan Parker and Seymour Wright played in London and Derby, on consecutive Sundays in October 2014, at the Kernel Brewery and the Derby Theatre Studio. Remarkably, at the Derby gig, it was revealed that when Parker had played a previous gig at the venue, several decades before, Wright had been in the audience—as a six-month-old baby!

While it is never quantified how many years separate consecutive "generations" of British improv, with Parker being classed as a first generation player while the likes of John Butcher and John Russell are second generation, that gap seems to be about ten to fifteen years. By such reckoning, Wright (born 1976) and Parker (born 1944) are at least two generations apart, as emphasised by their recording histories, Parker's having begun in 1967, Wright's in 2000.

However, the differences between the two extend way beyond age; Parker's early improv grounding was gained at the renowned Little Theatre Club, whereas Wright got his at Eddie Prevost's weekly workshop—a very different environment, where he developed such characteristics as dismantling and reassembling his instrument during a performance, and sucking in through his mouthpiece in order to hold up a metal disc by suction.

Stylistically very different to one another, Parker and Wright are each instantly recognisable when heard alone but, when the two are combined here, they each subtly shift towards the other—making each of them slightly less distinctive than usual but also improving the music from the duo. Alone, Parker is a far more fluent and fluid player than Wright, who is prone to pauses that break up the flow of his playing. Here, they combine to produce music that is a happy compromise between their individual solo styles.

It is only partially correct to say, as Fataka suggests, "the two interrupt and augment each other incessantly, creating tight spirals of difference and similarity that crackle with ideas and energy." In fact, the dialogue between the two is far subtler and more agreeable than the word "interrupt" implies; when one of the pair enters, the other is not forced to stop playing, but a more gentle accommodation is negotiated in which both players have a role. Yes, they certainly do augment each other incessantly and their music does crackle with ideas and energy—with players of this calibre, how could it be otherwise?

The major disappointment of this album is that is it does not last longer. From the two gigs, just over forty-five minutes made it onto this disc. Surely, at least that amount must have ended up being cut? From the music that survives, it is impossible to discern why. On this evidence, there is scope for another album of outtakes... or maybe a studio-recorded duo album? Until that day comes, this album will do very nicely, thank you!