Ruslan Khain Sextet: Tie It In! 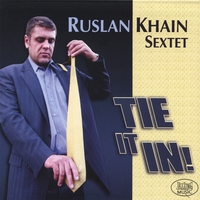 Count Basie and Duke Ellington are among the musicians who drew bassist Ruslan Khain to jazz.  Their influence is manifested in his music, as he graces his compositions with melody and swing, and keeps an ear open for rhythm and harmony.  This is the stuff that good, solid mainstream jazz is all about, and Khain makes sure that he does not stray from the calling on Tie It In!
Khain has a solid band with him.  As a bassist, he is in a way behind the band, laying down the rhythm and urging the front line forward. But he goes beyond that, as he plays with a pliancy and sense of development that makes his voice a commanding one.
”Chambers Street” brings Khain upfront. He sets the time and the pulse and plays with a hint of melody, marking his territory with doublets and a snappy beat. The saxophones provide a secondary voice, but that changes when Yoshiro Okazaki (trumpet) comes in. The melody becomes all encompassing and Okazaki gives it a greater presence with his warm tone, before passing it on to Richard Clements (piano), who adds to the impact with his agile runs.
Bop stokes “Queen-cident” through a round robin of solo spots. Dimitri Moderbacher is at the head on the tenor saxophone with brawny phrases, but Okazaki is no slouch either as he grabs the insides of the composition and turns them around with blistering phrases. Clements and Josh Brown on trombone have their say, and though they do not get a load of space, they use what they have with eloquence.


The empathy between the members is integral to the success of the band. They come together seamlessly and give the music a solid resolution, making Tie It In! a pleasure to listen to.