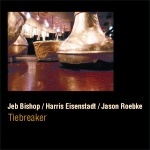 There's a pervasive quality of life to this one. Trombonist Jeb Bishop in particular, proves himself to be full of that quality, his rapid fire articulation tempered by a joy in subverting the inherent nature of his instrument. When bassist Jason Roebke and drummer Harris Eisenstadt take an interest in fatback funk that's of similar depth to his the result is music that's antithetical to the coldly cerebral.

The opening "Round Two" might be a joke in its placement but it's not at the expense of the listener. Bishop knows his Roswell Rudd, though not to the extent that he's deferential. Eisenstadt clearly enjoys laying down a back beat in the passages that require it but he's not one for deploying it as some kind of cliché. The music finds Bishop working an abstract seam which happily takes note of what's happening around him, which in Eisenstadt's case is a kind of restlessness with form. The whole is anchored by Roebke in the way of Jimmy Garrison.

At nearly thirty nine minutes it's perhaps inevitable that a certain loss of focus results on the medley of "Jacket Weather / Double Dog / How Are You Dear / Northstar." But the drum solo isn't the case here as Eisenstadt is one of those players for whom a groove is something seemingly difficult to lose. He proves this when he solos after some eleven minutes although it's merely a bridge to more collective work, as is Roebke's outing a few minutes later. By the time the twenty-fifth minute rolls around Bishop's getting expansive with his mute although the focus seems to be dissipating.

The music returns with a vengeance on "Mastetaker" where Bishop puts out variations as though something only slightly less important than his life depends on it and Roebke and Eisenstadt make with the urgency at the same time as they devote enough attention to that groove to ensure it stays nailed.

Within the overall context "Piggly Wiggly" closes things out like a manifesto. The traces are kicked over in no unequivocal fashion and the needs of the moment are addressed in addition to those of making music that's demanding of attention.