By GLENN ASTARITA
February 20, 2014
Sign in to view read count 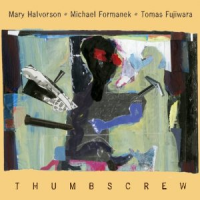 Kindred musical spirits unite on this composers' cooperative, featuring three musicians who have been forerunners and antagonists of new-fangled directions in the avant-garde jazz spectrum, other than ripping into customary modern jazz fare with a vengeance. The artists' divergent discographies offer a worldly testament to these aspects, besides their work as first-call session aces. With Michael Formanek's pronounced bass lines, guitarist Mary Halvorson's fascinating permutations, and drummer Tomas Fujiwara laying down a host of perky grooves, the group executes within a 360-degree realm of invention.

With her hollow-body electric guitar, Halvorson's strangely appealing detuning mechanisms, dodgy and zippy single note runs amid her use of distortion techniques, occasionally conjure notions of what Jimi Hendrix might sound like if he indulged in the avant-rock sphere of influence. However, Halvorson does not use a stack of Marshall Amps and a Fender Stratocaster, but her markedly unique approach combines zinging rock motifs via the jazz and improvisation schemas. Nonetheless, the band establishes an open form of communication, navigating through numerous channels, containing rough and tumble cadences and counterbalancing choruses. While moving forward, they also take a few steps back to re-engineer previously stated sub-themes and melody lines.

"Fluid Hills In Pink" is framed on Formanek's flickering bass lines, nicely mimicked by Fujiwara's snappy rim-shots and rolling patterns in support of an oddball theme. The trio often soars with vigorously enacted, linear unison lines and thronging clusters of sound. They basically keep you on your toes via works that are symmetrically designed with structure and free-floating improv segments. Moreover, "Goddess Sparkle" is constructed on the musicians' nimble phrasings, off-kilter voicings and wily abstractions. And during "Buzzard's Breath," Halvorson generates some high-heat by dishing out undulating harmonics and ascending thematic advances, tinged with distortion and bordering on a progressive-rock slant, propelled by Formanek's thumping bass notes.

Thumbscrew is uncannily cohesive, especially for a musical production that sneakily changes courses on an intermittent basis. Among other pluses, the trio projects a marvel of creativity, complemented by stinging solos and a highly intuitive command and control gameplan that provides thrills a minute and a simmering impetus.