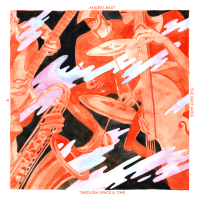 Calling your band The Bast'ards may be an obvious move if your surname is Bast, even if it might cost a few namechecks in some sectors of the media (the apostrophe softens the impact in print, but not over the airways). It's a name that suggests a certain aggressive edge, a punk-meets-jazz approach to music, a spot of agit-prop noise making. Through Space & Time, the band's debut release, does demonstrate the band's ability to play with power, but it also makes clear that these descriptions are off the mark. It's an inventive, engaging, creative album—recorded "as live" in the studio with no overdubs—that mixes funk, jazz, blues and Latin influences together across nine of Bast's original compositions, which, even if they have serious messages at their heart, are constantly enjoyable, upbeat and positive.

Bast's saxophone playing is at the heart of Though Space & Time. It can be raucous, funky and raw ("Fat, Sugar & Tragic"), swinging, but with a hardness to its tone ("South Of North Dakota") or flowing and pretty ("Think With Your Heart," "Hotter Than..."). "The Humble Warrior" is a solo performance, Bast building layers of saxophones to create a gentle, soft-toned backing beneath an equally gentle and attractive melody.

Bast's bandmates are equally impressive. Guitarist Thor Madsen moves between rhythm section and lead roles with ease. There's some fine unison playing with Bast, some fluid soloing and plenty of unfussy but effective rhythm playing. Underpinning the music, Tobias Dall Mikkelsen and Michael Dalgas are, quite simply, one of the coolest bass and drums pairings around. Both musicians are capable of hard-hitting, aggressive, playing that drives Bast and Madsen to energetic heights, but they really impress when things calm down and their ability to swing comes to the fore.

"Blues For The Beast Within" closes Through Space & Time, with Bast at his rawest and most raucous. It's got the feel of a late-night, jam-band, last tune before we close the bar kind of number: loose, relaxed, but groovy, guaranteed to send the customers home happy and looking forward to the band's next appearance. Which is as good a way to end an album as any.

Fat, Sugar, Salt & Tragic; South Of North Dakota; Dance OF The Possible Kiss; Happiness Always Happens; Think With Your Heart; The Humble Warrior; Hotter Than...; A Lot Of Hugging Going On; Blues For The Beast Within.