By JOHN EYLES
November 29, 2020
Sign in to view read count
Eddie Prevost has accumulated a range of achievements, any one of which would have guaranteed his place in the pantheon of improvised music. One of the founding members of AMM back in 1965, drummer Prévost is the only ever-present member of the iconic group.

In November 1999, he first convened the hugely influential London workshop which (events permitting) has met to improvise every Friday evening since; the number of attendees has ranged from single figures to mid-twenties, with over five hundred different players, of over twenty different nationalities, having attended during its twenty-plus years.

Prévost set up his Matchless Recordings and Publishing in the late '70s. To date, in addition to John Tilbury's monumental biography Cornelius Cardew (1936-1981) a life unfinished, the publishing arm has published four books by Prévost himself, the most recent being the part autobiographical An Uncommon Music for the Common Man (Copula, 2020). In 2018, the record label issued its hundredth CD, a high proportion of those featuring Prévost, in AMM or with others. The three albums below are the start of Matchless' second century. Prévost plays on all three... 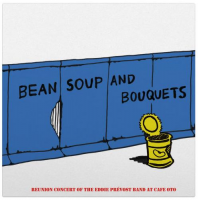 Anyone whose only experience of Prévost's music has come from listening to AMM may be in for a surprise when they hear this album. The music on it dates from a reunion concert of the Eddie Prévost Band which took place at London's Café Oto on Monday 17th February 2020; this band was formed in 1977 and had two LPs, recorded at a May 1977 concert at Cambridge College of Art & Technology, which were the first releases om Matchless in 1978, re-released together on the label's first CD in 1993. The band's line-up consisted on Prévost on drums, Marcio Mattos on bass, Geoff Hawkins on tenor saxophone and Gerry Gold on trumpet or flugelhorn; the Oto concert was the first time the four had been together since an appearance at the Carmarthen Arts Festival in 1993.

If the instrumentation suggests a conventional jazz line-up, that is borne out by the music itself, as well as Prévost's description of the quartet as his "late 1970s free-jazz band." While that phrase should not lead to expectations of anything like Fire Music or the Ayler brothers, it is free in that it does not conform to a rigid head-solo-solo-reprise format. Despite that, the album is peppered with impressive solo passages from all four players, with Hawkins and Gold repeatedly to the fore, either individually or together. Throughout, Prévost's prowess as a jazz drummer—as opposed to an improv player, in AMM or otherwise —is on display, whether he is playing solo, in tandem with the equally impressive Mattos, or in support of the horns. The album's three tracks—practically their entire set—demonstrate the empathy and mutual understanding of the four, with no-one dominating or leading. Altogether, this is a fine jazz album by a group which deserves great respect and should be remembered as more than a footnote in history. 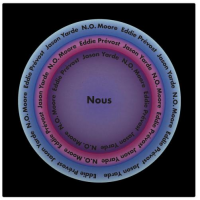 In the second half of 2011, Prévost played and recorded a series of concerts in London in trios each with a saxophonist and a bassist. The following year, the resulting recordings were released as four Matchless CDs under the umbrella title "Meetings with Remarkable Saxophonists." The saxophonists in question were Evan Parker, John Butcher, Jason Yarde and Bertrand Denzler, so it is no surprise to find Yarde and Butcher on two of these new releases. Recorded in concert at London's Vortex jazz club on February 23rd 2020, Nous captures the first occasion when this trio performed together—Prévost on drums, Yarde on saxophones plus electronics, and London workshop stalwart N.O. Moore on electric guitar and effects.

The album title, Nous is (maybe deliberately) ambiguous; pronounced to rhyme with "boo," it is the French word for "we"; pronounced to rhyme with "house" it is an English word meaning "good sense," among other things. Anyway, it is arguable that for improvised trio playing to be successful, both are important, "we" and "good sense." The sleeve note informs us that Moore prefers the term "social composition" to "instant composition" to describe free improvisation. The music on the album itself provides strong evidence in support of Moore's view; bursting with energy and ideas, the interplay between the players frequently resembles a three-way conversation in which everyone speaks at once, meaning it can be difficult to decide who is responding to whom. As Prévost has history with both Moore and Yarde, it is unsurprising that he responds rapidly to each of them and vice versa. As this was the trio's first performance together, the empathy between the guitarist and saxophonist is surprising. There is no tentative getting-to-know-you period; right from the off, they respond to one another like players with years of experience together, fluently trading ideas and phrases like old mates.

The end result is an album of first-rate improv which handsomely repays repeated listening. Anyone needing a crash course in the difference between free jazz and "social composition" need only compare this album and the one above back-to-back. More soon, please. 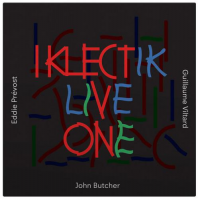 John Butcher and Prévost first recorded together in July 2005, as a duo, the resulting album, Interworks, appearing on Matchless the same year. During the period when Keith Rowe was temporarily not a member of AMM, Butcher recorded the album Trinity with the remaining members, Prévost and Tilbury, in 2008, at Trinity College of Music, leading to some fruitless speculation that he might become a fully fledged member of the group. The Prévost-Butcher duo Visionary Fantasies, recorded at Iklectik in April 2018, was Matchless' hundredth CD release.

The trio heard here, with bassist Guillaume Viltard joining Prévost and Butcher, is exactly the same one that recorded Meetings with Remarkable Saxophonists -Volume 2 in August 2011. Recorded at Iklectik in November 2016, Iklectik Live One comprises four tracks totaling sixty-seven minutes. Despite the five years between them, the two albums work well together as companion pieces; in particular, it is good to hear Butcher featured in a trio like this where he is the main focus of attention, with bass and drums providing excellent support to his soloing but each also having their own solo spots throughout. As a trio, the three work together as well as many a trio with a longer history and more frequent gigs and recordings together.

Yes, Matchless' second century of CDs has begun with a 100% success rate. Plaudits all round.

Tracks: Attunement; Lorelei of Music; Between You and Me and; Impossible Meaning; A Tune Meant.