By JEROME WILSON
December 1, 2019
Sign in to view read count
The more adventurous and abstract forms of jazz guitar get a lot of attention these days, but these three releases prove that mainstream guitar players still have a lot to say. 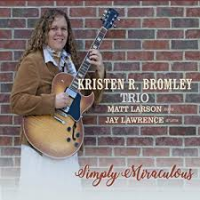 Perhaps the most amazing thing about this CD is that it exists at all. Kristen Bromley is a performer and teacher of jazz guitar who broke her arm in 2016. She damaged nerves in the arm to the point where she was told she would only ever regain limited use of her left hand and arm. Yet, by November 2018 when this CD was recorded, she had recovered to the point of being able to play guitar with full range. Her sound here encompasses both breezy acoustic strumming and intricate electric playing. She excels on the Kenny Burrell-like languid blues lines of "Winter Sundown" and the tangy funk chords on "Simply Miraculous." Matt Larson and Jay Lawrence are invaluable in setting the stage for Bromley. Their combination of booming bass and nimble drums fit together especially well with her bluesy swagger on "Rhythm I've Got."

There's also a quieter side to the guitarist's playing that comes through on the courtly samba licks of "Winter Sunrise" and the mix of wide acoustic strumming and frisky folk-rockish rhythm on "The L's are Si"ll"ent." The spiritual aspect of Bromley's work dominates the CD's final two tracks. On "Lasst uns Erfeuen" she picks through fragments of hymns before stepping into a flowing rhythm that sounds like vintage Pat Metheny and"I Know my Redeemer" is quiet and graceful acoustic playing. 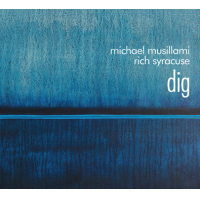 Guitarist Michael Musillami and bassist Rich Syracuse spend this CD playing variations on music that Bill Evans either composed or played. Everything is deeply investigated by the pair. The lesser known pieces, like C Minor Blues Chase" run through winding, slippery paths while the more familiar tunes deviate greatly from their familiar melodies. A dreamy "All Blues" has Syracuse's throbbing bass sliding woozily around Musillami's springy electric chords while on "Nardis," stabbing guitar notes and low arco bass slowly congeal into something resembling the theme.

This recording naturally brings up thoughts of the guitarist most associated with Evans, Jim Hall. Musillami's tone does suggest him at times, particularity on the billowing lyricism of "How My Heart Sings" and the bulging, metallic chords of "Twelve Tone Tune." However the measured clarity of his playing and his sensitive interaction with Syracuse is enjoyable in its own right. This is an excellent new entry into the long list of Bill Evans tributes.

This is a nicely understated but swinging conversation between three excellent musicians, guitarist Romain Pilon, bassist Jeff Denson and drummer Brian Blade. Each man carries equal weight in the trio's sound and their fluid rapport is evident on tracks like "Sucre" and "Generation." On both, Pilon's slippery guitar slides neatly into the space between Blade's crackling shuffle beats and Denson's resonating bottom, giving the music a loose, casual swagger.

All compositions on the CD come from Denson and Pilon and everyone get his chance to step to the front of the trio and shine. "Nostalgic Farewell" is a lyrical tango with guitar and bass taking turns leading as Blade expertly works his brushes. The drummer gets an up-tempo workout at the beginning of "Listen Up," rattling and cracking furiously before Plion and Denson come in and take the music on a dizzy roller coaster ride. "En Trois Temps" is a swaying bass-led waltz, and "Song Of A Solitary Crow," with Pilon in charge, toggles between slow country rock and heavier, rumbling jazz-rock. The title track is a lovely atmospheric ballad that really shows how well fit the three players fit together. They are a trio that plays with quiet energy and restraint, making music that has both beauty and substance.

Tracks: Simply Miraculous; The L's Are Si"ll"ent; Winter Sundown; Winter Sunrise; Rhythm I've Got..."Quarky" as it Maybe; Lasst uns Erfeuen "Let us Be Joyful—Let us Rejoice"; I Know My Redeemer -He Lives!