By JOHN EYLES
May 11, 2016
Sign in to view read count
The Balance Point Acoustics label was set up by double bassist Damon Smith in 2001 to document his own music. In the years since, the label has issued a steady stream of recordings, most featuring Smith. Significantly, the first of the label's releases not to include the bassist was the 2006 Henry Kaiser solo album Domo Arigato Derek-Sensei!, a tribute to Derek Bailey who was recently deceased at the time; Kaiser and Bailey had first recorded together as early as 1981, and later recorded the highly-regarded duo Wireforks (Shanachie, 1994). In the years since 2006, Balance Point has increasingly featured Kaiser, with or without Smith, as illustrated by the three contrasting releases below. 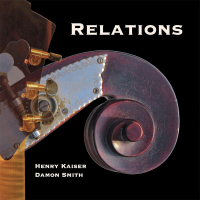 Studio-recorded in November 2013, Relations is the first duo recording by Kaiser and Smith, even though their association goes back two decades and, since 2006, they have recorded together in other formats, such as a trio with Weasel Walter on drums. The music here is free improvisation, with Kaiser on his seven-string guitar (brought to the session at Smith's request) and Smith on a 1934 flat-back bass. The eight tracks vary in length from under three minutes to almost fourteen, totalling almost fifty-one minutes.

The interactions between Smith and Kaiser show evidence of their years playing together, particularly in their trust of each other and the way their contributions combine into an integrated sound. The shorter tracks, those around three to four minutes, each tend to be based on a single idea which as explored but not greatly developed. So, the shortest track, "Singular, Isolated, Sufficient," centres around some atypical sounds from both guitar and drums, sounds not heard much on other tracks here; having established an unusual soundscape, not a great deal then happens to it and the track ends explosively, which sounds like a good escape route. It is rather like an essay with a good opening paragraph but not much of note afterwards. Significantly, the album's track titles are all taken from Company Week, a book by Peter Riley, a commentary on Company Week 1977.

The longer a track is, the more exploration and development it displays—the mark of good improvisers, surely. The album's longest track, "'Departure' (Into the Air)," is a multi-faceted epic with plenty of variety and drama and, importantly, no hint of the two padding it out or vamping to fill space. From start to finish, the listener is swept along by the inescapable rightness of the pair's decisions. And, afterwards, the only sensible option is to hear it again.

In his notes, Smith comments that the session which produced this album should also yield two further duo albums—very welcome news, judging by the music here. Can't wait. 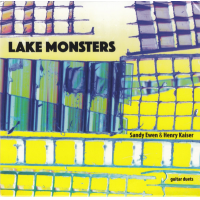 Recorded live in the same studio, on the same day, as Relations, above, Lake Monsters does not feature Smith's bass but is a guitar duo, pairing Kaiser with Sandy Ewen. When Kaiser wrote sleeve notes for a 2012 trio album by Ewen, Smith and Walter, he said, "forget about melody, harmony and rhythm for the moment and listen to everything else that you can hear going on." The latter part of that quote could just as easily apply to Lake Monsters, without the suggestion to forget about melody, harmony and rhythm. While this music is not conventionally melodic, harmonious or rhythmic, those elements are not totally irrelevant to it.

Right from the start of the fourteen-minute opener, "Paddler," Kaiser is playing chords in rhythmic patterns strong enough to set toes tapping. Of course, Kaiser is well experienced in guitar duos, having collaborated in duos with such heavyweights as Fred Frith, Jim O'Rourke and Eugene Chadbourne as well as Bailey. Ewen uses pieces of metal, plastic, chalk and any other object that can coax interesting sounds from the guitar strings and pickups, but that does not mean the sounds she produces are cacophonous; on the contrary, her sounds fit neatly with the framework generated by Kaiser. And so, the pattern for the album is set, with the two guitars not deliberately or obviously acting as a duo but in ways that are compatible and fit together well enough to work and make for relaxing, wince-free listening. Altogether, a very successful pairing. 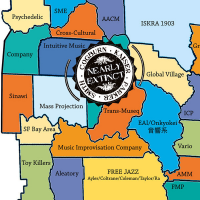 Last and by no means least, Kaiser and Smith reappear in the company of trombonist Steve Parker and drummer Chris Cogburn, the four combining in a free improvising quartet in the classic mould. That point is emphasised by the sleeve art which depicts a map showing several territories labelled with names such as AACP, AMM, Company, EAI/Onkyokei, FMP, Free Jazz, ICP, Iskra 1903, Music Improvisation Company, SME, Vario... The message is loud and clear—this quartet see themselves as part of an ongoing improv tradition as defined by such labels. Across seven tracks, totalling over seventy-eight minutes, studio-recorded in April 2015, they more than justify that view. Despite the quality of the two duos, compared to them the addition of two more musicians brings a quantum leap in the variety and complexity of the music produced, making this disc the pick of this bunch.

As with the Kaiser-Smith duo, above, the longer this quartet go on, the better they sound, fortunate as there are two twenty-minute tracks at the heart of Nearly Extinct, the opener "East Cape Yupik" and "Hixkaryana." Although each of them starts off in a relatively conventional manner, the four are soon into a series of exchanges in which they all engage equally; with guitar and trombone often to the fore, but Smith and Cogburn featuring as much as acting as the rhythm section, the four are adept at building multi-layered soundscapes that are full but not cluttered. In such soundscapes; the focus constantly shifts around between the four players and there is always something going on which deserves particular attention. None of the four deserves particular praise, but Parker is worthy of comment as he repeatedly makes his trombone sing in a manner reminiscent of the late, great Paul Rutherford, more than justifying that mention of Iskra 1903 in the sleeve art.

Overall, though, the album is a collective triumph with all four members deserving credit. This is a quartet that we must hope to hear more from.