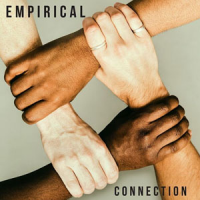 This is a young and intensely hip quartet who received a MOBO (Music of Black Origin) award in 2010 for Best Jazz Act in the UK, yet Connection is the musicians inaugural effort for USA-based Cuneiform Records. Similarities to the output of fellow countrymen, saxophonist Django Bates and Led Bib may be in order, primarily due to Empirical's creative and energized aspects, along with others who seem to be trumpeting the new era of jazz by generating high-impact, and cleverly articulated spins on bop and the free realm. The quartet's rapidly pumping heartbeat, rippling currents and exhilarating shifts in strategy provide an elevated form of entertainment, reinforced by the musicians' resilient technical prowess.

The artists' compositional fortitude and mode of execution is crisp and to the point. They state their cause and move on to other symmetrical discourses, but gradually increase momentum on works such as "Stay the Course," launched by alto saxophonist Nathaniel Lacy's yearning lines, encircled by Lewis Wright's echoing vibes and followed by their concise, multihued phrasings. And "Driving Force," commences with the vibraphonist's looping ostinato, serving as a prelude for an off- kilter fun fest where they all strut their impressive stuff via swarming clusters, modeled with brash and tightly wound choruses.

They dish out complex time signatures during the hard and ferocious bop piece "The Two-Edged Sword," along with notions of a torrential feeding frenzy as they shift into 10th gear with extremely coordinated aplomb. Here, drummer Shane Forbes' brisk ride cymbal work conveys a sense of urgency atop bassist Tom Farmer's pulsating bottom. Other compositions feature snappy Latin-jazz frameworks and piquant improvisational spots. Yet the final track "It's Out of Your Hands," is driven by Wright's tuneful melodic passages, steering his cohorts into a jazzy dreamland, eventually encapsulated by another Latin tinged motif.

Even though the musicians intermittently execute intense, speedy and recoiling-like movements, they spawn a balancing act without forsaking any tangible qualities of a principle theme. The quartet doesn't spiral into self-indulgent, free- form soloing excursions with no end in sight. On the contrary, it's a shrewdly conceived program where they come at you from dissimilar angles while also settling into customary progressive jazz fare, fashioned with an expansive range of polytonal modalities.

Initiate the Initiations; Anxiety Society; Stay the Course; Driving Force; Lethe; The Maze; Card Clash; The Two-Edged Sword; Mind Over Mayhem; It’s Out of Your Hands.