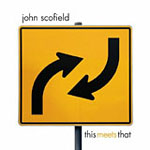 Guitarist John Scofield's This Meets That is a trio record—sort of. While Scofield has old friends and collaborators Steve Swallow and Bill Stewart on board as his rhythm section, the guitarist also enlisted quite a horn section for this venture: Roger Rosenberg, Lawrence Feldman, Jim Pugh and John Swana add a harmonic lushness and punch to the arrangements.

The originals on the disc are classic Scofield. While there is plenty to please jam-band fans, jazz guitar aficionados will be in six-string heaven as well: "The Low Road" is a funky, swinging track that manages to be melodic and biting at the same time; "Down D" lopes along in drop D tuning and "Heck of a Job," a sarcastic reference to the government's handling of the Hurricane Katrina aftermath, displays a groove taken straight from New Orleans.

The cover tunes prove to be interesting, diverse choices. Country crossover star Charlie Rich's hit "Behind Closed Doors" brings a spaciousness and simplicity that is welcome diversion midway through the album. Fellow guitarist Bill Frisell makes an appearance on a reworking of the 1960s classic "House of the Rising Sun"; his tremolo-laden guitar adds a touch of spaghetti western ambience. The CD closes with the Rolling Stones hit "Satisfaction," one of the first songs the 56-year-old Scofield learned on guitar. This energetic arrangement captures his essence, a player who likes to wander between musical worlds.