William Bell: This Is Where I Live 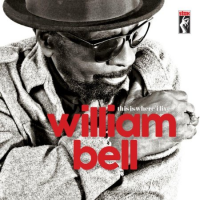 Stax Records was recently revived under the umbrella of the Concord Music Group, in a commendable gesture to acknowledge the southern soul artists on the legendary label. When Stax (formerly Satellite Records) originated in 1961, one of the first artists signed was a young singer/songwriter named William Bell, who hit the charts that same year with "You Don't Miss Your Water." But it would be for his monumental song "Born Under A Bad Sign" co-written by Booker T. Jones, and recorded in 1967 by Albert King that he is remembered. Bell, now age 76, returns to Stax after forty years with This Is Where I Live, a testament of truthful soul singing at its best.

Teaming up with producer John Leventhal, Bell revisits that classic Stax sound where he began so long ago, like returning home, picking up where he left off. Memphis is the home of Stax, so there is a mild undercurrent of country, but this is pure soul. From the mid-tempo groove of "The Three Of Me," Bell wastes no time in setting the stage, and showing he is a singer of the highest caliber. His mastery of lyrics and ability tell a story everyone can relate to is evident on "The House Always Wins," a tale of life told in terms of gambling and losing. The tempo picks up with "Poison In The Well," and it drops way down on "I Will Take Care Of You," a poignant promise to an ailing love.

He revisits "Born Under A Bad Sign," this time a bit softer, but he still has no luck at all. Digging into the Jesse Winchester songbook, "All Your Stories," is an acoustical look in the mirror, a perfect vehicle for a man with a long and interesting past. Bell sings of this life in "This Is Where I Live," and how music has been his sanctuary and refuge, whereas "More Rooms," depicts an empty house, after the love is gone. The impact of harsh words shaped "All The Things You Can't Remember," as forgiveness is erased from possible options. The Staple Singers groove springs into "Mississippi-Arkansas Bridge," a colorful painting of a musician's life in the south, and he goes back to his roots with "People Want To Go Home."

There was a lot of pressure in the making of this record. The sheer magnitude of the Stax legacy is a hard act to follow, so it had to be someone who came from the primordial source. William Bell is that person. An introspective soul singer who not only has the credentials, but most significant, has the voice.

The Three Of Me; The House Always Wins; Poison In The Well; I Will Take Care Of You; Born Under A Bad Sign; All Your Stories; Walking On A Tightrope; This Is Where I Live; More Rooms; All the Things You Can’t Remember; Mississippi-Arkansas Bridge; People Want To Go Home.

Title: This Is Where I Live | Year Released: 2016 | Record Label: Stax Records