Donald Harrison: This Is Jazz 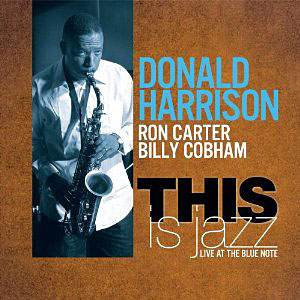 Saxophonist Donald Harrison's name is writ large on the cover of This Is Jazz, but the album is a collaborative trio in every sense. After all, playing with legendary bassist Ron Carter and drummer extraordinaire Billy Cobham could never be equated with simply hiring sidemen. Recorded live at New York's Blue Note, the six tracks on this album take post- bop expansion to exemplary heights and keep it there for the duration.

Harrison has a tight but wandering presence on alto. He drifts off into almost spacey places as he improvises, with peculiar trills and off-key runs, but in doing so he stays fairly close to the beats and, ultimately, the melodies as well. He does a masterful job of engaging in serious explorations without dissolving the framework of the songs.

Carter, with five decades of professional experience and an unparalleled list of cohorts, can play anywhere he wants, for as long as he wants, and he takes full advantage of his seniority. This Is Jazz shows him not only as a great rhythm bassist, but also as an exceptional soloist. He's always rock-solid behind Harrison, but really shines in his solo improvisations, bouncing around against the drums, or, in the case of "You Are My Sunshine," simply playing the whole song by himself. Part of the thrill can be credited to recording engineer Steve Remote of Aurasonic, Ltd. who captures the woodiness, vibrations and scale of the acoustic bass, instead of just low-note tones.

The drums are the most understated element of the trio, but the skins are also where the album reveals its deepest subtlety. Cobham is an elegant drummer, with stick work that is supportive and unerringly tasteful, but also quietly complex. Seemingly content in the rhythm role, Cobham doesn't take a solo until the fourth track, Victor Feldman/Miles Davis' "Seven Steps To Heaven," and even then his statement is a tightly considered against the composition. Cobham's drumming reveals class and an attention to detail that should be studied and emulated.

This record features three masters showing all the world how this music is really played. Combining a first-rate set list, equal measures of exceptional soloing and ensemble playing, and an energy that should be bottled, This is Jazz truly lives up to its name.

Cut & Paste; MSRP; You Are My Sunshine; Seven Steps To Heaven; I Can't Get Started; Treme Swagger.