Toscha Comeau: This Could Be Love 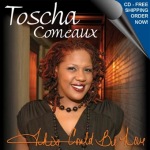 "How can you separate the dancer from the dance?" When the poet W.B. Yeats asked this paradoxical, rhetorical question to express the organic, indivisible relation between the artist and his or her creative work, he couldn't have had so-called "contemporary," or "smooth," jazz in mind. There's no shortage of superior musicians paying the rent by playing music with which they sense little personal connection. And while most cities seem to have at least one major radio station devoted to the sub-genre, the music, however competently played, is usually sufficiently bland and faceless to make a Monk fan switch to a C&W station for relief. But in the case of vocalist Toscha Comeaux's This Could Be Love, you'd best not touch that dial too quickly.

No doubt about it, this is a slick, well-produced album, replete with Sanborn-style saxophone riffing, hard- popping funky bass grooves, heavily-accented off-beats, and plenty of sweetening by a "Dream-Girl" supporting chorus. But Comeaux' powerful full-throated instrument never gets smothered in the mix, maintaining a confident yet personal and inviting, vibrant glow throughout. Moreover, even though the textures and production values are immediately suggestive of a "commercial" date, there's more creativity here—in programming as well as performance and production—than at first may meet the ear.

To begin with, Comeaux herself has multi-tracked several of the background vocals, which are tastefully employed, as on the infectious bossa nova strains of "Don't Turn Around" by Peter Yates. The latter is credited with nine of the eleven songs, which together comprise a consistently tuneful yet impressively diverse program. No cheesy string or Yamaha synths here; the music blends Fender Rhodes and acoustic piano ("Never Don't Think") along with churchy B3 and soulful guitar ("Tell Me It's Just a Bad Dream").

Yates' "Sunday in New York" not only leaves the featured singer with some room to scat, stretch out and swing, but is one of several numbers on which the bass lays down an unapologetic walking 4/4. Contributing some retro-hip textures are instruments representing all three sections of a '40s swing band: trumpet, trombone, and sax. The extra firepower is soon deployed to dramatic effect during the salsa strains of Yates' "If This Is Love," on which trumpeter Tom Parmerter gets a chance to test his chops against the full-bodied voice and full-frequencied range of Comeaux, who can seamlessly join her mid-range "power zone" to a soaring soprano register with effortless control.

The double focus on vocalist and composer continues with a jazz waltz ("It's All 'Cause of Loving You"), followed by a flawless hand-off on "When I See That Look" between Comeaux and soprano saxophonist Alain Bradette. Two non-Yates numbers are welcome additions: a lesser-known Bacharach-David tune, "You Can't Get to Heaven (If You Break My Heart)," and a '40s chestnut associated with Billie Holiday, "Mean to Me." Beginning and ending with a highly percussive, somewhat thunderous and frenzied Latin section, the freshened arrangement threatens momentarily to capsize, but the straight-ahead swinging of the ensemble and the commandeering of Comeaux bring the cruise to a reassuring and satisfying completion.

Based on the recorded evidence, Toscha Comeaux's is a talent that bears close watching. She not only has exceptional pipes and explosive power but the training and solid vocal technique to insure hers is not a gift that is wasted. Add to these strengths an inerrant sense of pitch (she bends notes just enough to keep them alive and interesting) and an undeniable understanding of swing, and you have a young exciting artist on the verge of leaving a major, lasting mark on the contemporary music scene.

If This Could Be Love; Don't Turn Around; You'll Never Get To Heaven (If You Break My Heart); A Day In Paradise; Never Think That I Don't Really Care; Tell Me It's Just A Bad Dream; Sunday In New York; If This Is Love; It's All 'Cause Of Loving You; When I See That Look In Your Eyes; Mean To Me.