Henry Threadgill Zooid: This Brings Us To, Volume 1 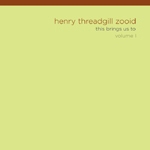 Pi Recordings was founded in 2001 to release a pair of albums by legendary AACM composer/multi-instrumentalist Henry Threadgill, the electric Everybody's Mouth's a Book (with Make a Move) and acoustic Up Popped the Two Lips (with Zooid). This Brings Us To, Volume 1 is his first commercially released recording in eight years—a homecoming of sorts for both Pi and Threadgill.

Threadgill's longstanding quintet features Liberty Ellman (acoustic guitar), Jose Davila (trombone and tuba), Stomu Takeishi (acoustic bass guitar) and Elliot Humberto Kavee (drums). Zooid has been Threadgill's primary working ensemble since the beginning of the Millennium, replacing the electrified Very Very Circus and Make a Move bands of the nineties. Revealing a studied rapport, each member of the quintet has longstanding ties to the leader; all are veteran members of Zooid except for Takeishi, who was in Make a Move.

A zooid is "a cell capable of independent motion within a living organism." Transposing the concept to his expansive writing, Threadgill assigns separate interval blocks to each musician, allowing them to operate independently of the group while collectively maintaining an overall sense of melodic, harmonic and rhythmic structure.

Complementing these contrapuntal themes is a bevy of intricate, multi-layered rhythms. Though the downbeats are far from obvious, the polyrhythmic undercurrent is relentless, stirring even in the sparest setting. Informed by years of experience, Davila, Takeishi and Kavee negotiate the unusual meters and thorny contours of these labyrinthine structures with aplomb.

Equally inspired by the work of the Western neo-classicists as Afro-Cuban rhythms and traditional Javanese Gamelan, Threadgill brings a rhythmically charged, theatrical air to his bluesy, R&B inflected compositions. Arranging the album's six songs into a dramatic arc, the set progressively intensifies, mirroring Threadgill's switch from flute to alto. Opening and closing the album at extreme ends of the spectrum, "White Wednesday Off the Wall" embodies the pastoral qualities of pointillist chamber music while "Mirror Mirror the Verb" is a terse exercise in fractious abstraction. In-between, the brisk flute driven numbers "To Undertake My Corners Open" and "Chairmaster" careen with quicksilver precision, while the vociferous "After Some Time" and "Sap" exude a raw, primal quality.

Ellman and Threadgill share the spotlight as the quintet's primary soloists, alternating circuitous statements with ebullient glee. Unleashing blistering salvos that encompass a multitude of Eastern and Western traditions, Ellman's splintery acoustic fretwork offers a rich contrast to the leader's sonorous phrasing. Threadgill unfurls fluid variations from his vocally expressive flute on the first half of the album, tortuous bluesy cadences from his acerbic alto on the second.

Despite its relatively brief duration (39 minutes), This Brings Us To, Volume 1 is a spectacular return from an important jazz composer, and is hopefully an indicator of more to come from Threadgill and Zooid.