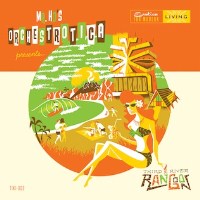 The "Mr. Ho" of Mr. Ho's Orchestrotica is vibraphonist Brian O'Neil, who has put together a vibraphone quartet, also featuring flute, percussion and bass, for Third River Rangoon. The music, dubbed "exotica," drifts back and forth across the less than distinct border between third stream chamber jazz and classical, with hints of world music influenced by a tropical island Tiki god thrown in for good measure.

Mr. Ho's previous exotica release explored the artistry of Mexican composer Juan Garcia Esquivel on The Unforgettable Sounds of Esquivel, with a 23-piece ensemble, the music described as a "happy, bouncy puppy of an album." Third Stream Rangoon takes the sound into a spacey but much more introspective area, with a murky, dreamy atmosphere fashioned from the melding of the vibraphone's ringing sustain with the deep, glowingly rich tone of Geni Skendo's bass and c flutes.

The inspirations for the music—eight of the eleven tunes written by Mr. Ho—are about as esoteric and off the wall as it gets: A twenty foot-tall stone statue sentry at the former Aku-Aku Restaurant in Cambridge, Massachusetts ("Lonesome Aku Fisherman's Wife"); Albanian drone singing ("Phoenix, Goodbye"); the Bulgarian kopanitsa ("Autumn Digging Dance"); and the "Allegretto" from Shostakovich's 10th Symphony ("Moai Thief").

"Exotica" has been described as a form of "tropical jazz," and it carries a reputation as music well-suited to accompany the sipping of umbrella drinks and lounging under island palms. However, Mr. Ho brings in a studied jazz depth throughout, and a Middle Eastern flavor with the inclusion Tev Stevig's oud on Tchaikovsky's "Arab Dance" and on his own "Autumn Digging Dance." These additions bring another layer of the exotic to the sound that was pioneered in the fifties and lives on today with Third River Rangoon, a serenely intoxicating blend of third stream chamber sounds, drifting tropical reveries and bongo-laden tone poems.