BY DAVID ADLER
September 1, 1999
Sign in to view read count 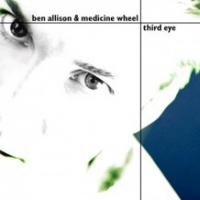 The next time someone tells you that jazz is dead, hit them upside the skull with a copy of Third Eye. Bassist and bandleader Ben Allison is simply a towering talent, a jazz innovator, and he’s put to tape some of the grittiest, prettiest music I’ve ever heard.

Instrumentation-wise, the ensemble is slightly offbeat: two tenor/soprano/bass clarinets, trumpet/flugelhorn, cello, piano, bass, and drums. Ana Dinkjian joins the band on oud and cümbüs (pronounced "jumboosh") for "Kush," a Middle Eastern-influenced groove named for the NYC Lower East Side bar where Allison’s trio plays weekly. Allison plays acoustic guitar on this tune, doubling the tricky melody with Tomas Ulrich’s cello. Unusual timbres also crop up on "Mantra," which begins with Allison hitting his strings with a drumstick. Pianist Frank Kimbrough plays part of the gorgeous melody on a toy piano, adding a chime-like sound to the mix. The result is magical. There’s really no jazz with which to compare this; it almost sounds like Led Zeppelin at their folky best.

How nice, in this age of Kenny G, to hear Michael Blake’s ballsy and brash soprano solo during "Four Folk Songs," the album’s opener. This piece is a marvel. It starts with a 6/8 groove, and just as your ear gets into it, a Mingus-like blues shout erupts from the horns in a subtly contrasting 4/4. It’s off-kilter but swings like mad. "Love is Proximity," written by the underappreciated pianist Herbie Nichols and the album’s one non-original, is tender yet strange, featuring wonderful solos by Kimbrough, Blake, and Allison. There’s one particular harmonic sweet spot in the tune that gives you the chills every time it recurs. Ted Nash’s tenor and Ron Horton’s flugelhorn are featured on "Random Sex and Violins," another strong ballad that calls Kenny Wheeler’s melodic sense to mind. The cinematic "Andrew" features a moving cello/piano counterpoint on the melody as well as a pizzicato solo by Ulrich. A startling rhythmic figure is woven into the form and actually ends the piece, a fine example of this music’s unpredictability.

Although Allison cites Billy Strayhorn as a main influence behind "A Life in the Day of Man Ray," I hear echoes of Mingus again. Something about its simple swing time — Allison calls it a "martini groove" — reminds me of Mingus’s "Jelly Roll." Nash really digs in with his tenor on this one. The fast 6/4 swing of "Hot Head" also recalls Mingus. Drummer Jeff Ballard, of Chick Corea’s Origin, shines toward the end of this number, as he does throughout the program. Allison explains that this tune came about as a sort of founding anthem of the Jazz Composers Collective, "a non-profit, musician-run organization dedicated to fostering new music." Interestingly, the Collective is listed on the CD as co-producer along with Allison himself.

The final track, "Pot Head," is simply the main melody of "Hot Head" played slowly. Allison explains: "[The piece] was realized by accident in rehearsal when we played the melody of Hot Head one time through very slowly to make sure everyone had the correct notes on their music. It sounded so different that we tried a take of it." Such is the creative inspiration that informs every note on the record. One hundred stars.