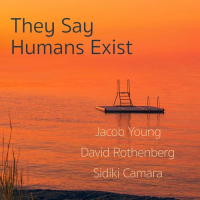 "Is it enough to watch a flower grow?" Jacob Young muses over a slow-drifting cloud of clarinet and light percussion. "Is it enough to just be, to mind our own business?" If that sounds too much like coffeehouse open-mic poetry, the natural spirit behind it is genuine enough, and the vague spoken words only pop up briefly at the bookends of this short-and-sweet free-improv outing. This trio is thinking of big things—the title represents what aliens might say upon first hearing music from our planet—and so their meanderings are meant to be a little earthly and unearthly at once.

The next breezy meditation finds Young picking up a guitalele (a sort of guitar/ukulele hybrid, of course) as the three drift away to some imaginary sunny beach; after that, David Rothenberg switches to a block flute and whistles over Sidiki Camara's bed of African hand percussion. The three continue drifting from one thing to another as the session ambles along. Young alternates his string-plucking with some guitar atmospherics that generally sound organic despite being made with electricity. Camara adds an expressive vocal chant mid-set. Rothenberg's velvety bass clarinet lines soothe and flow as patiently as the waves.

It's a beautiful mix of textures very much in tune with nature and humanity. The three have a knack for falling into a groove as they exchange ideas, coming out abstract and yet not really formless in the end. It touches on tones and universal despite avoiding any styles or patterns too familiar. If there really are aliens out there listening for a taste of what Earth is like, they could do much worse for a first globe-spanning bite than this.

Supernatural Roadtrip; They Say Humans Exist; Thank you My People/Kaou Barikada; Tactile Memory; Cakkubg Oeioke to the Music/Ayou Wele; The North/Koron Fe; Out of a Dream; Soundtrack Lost; Blood Horizon.