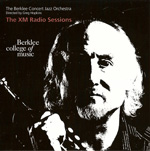 Serious students of jazz get together every semester in Boston at Berklee College under the leadership of trumpeter Greg Hopkins to learn the ropes and work with big band arrangements that come from the school's creative minds. Hopkins, who has been teaching at the college since 1974, recorded with the Buddy Rich big band while paying his dues in the jazz world, and has also recorded with his own big band and quintet on the Summit label.

Berklee's seventeen-piece big band toured last spring and recorded this album in the XM Performance Hall at XM Satellite Radio in Washington, DC. They were on top of their game. Soloists step forward from each section, and the band's well-rehearsed arrangements come with tight fittings. Everything falls neatly into place and the band executes well. While the ensemble's interpretation works effectively, most of the solos pale in comparison. As a whole, the band swings hard and comes up with a dramatic performance. The individual soloists remain tight and seem, for the most part, unwilling to turn it loose. Nevertheless, the band provides a dramatic performance filled with group intensity.

With Toru Dodo's "Inorganic Swing, the musicians charge hot and heavy for an exciting drive. The suite-like piece moves through changing moods that challenge the band. From fortissimo to pianissimo and back, the sections wail with an intense outlook. The band's saxophone section converses with the lower brass in a cycle of emotional passages that ride firmly on the rhythm section's back.

Bassist Hogyu Hwang stands out for his workmanlike camaraderie with piano and drums, as well as his exceptional solo spots. Two trumpeters converse creatively on "Stolen Moments with class, and several saxophonists rip off exciting solos elsewhere. On David Doruzka's Blues #2222, the band surges forward with a confident groove that loses momentum during the individual solo sections.

The group closes the performance with Toru Dodo's "Melancholy Cats, which employs some interesting voicing among the woodwind and brass sections. It lights up the band and places everyone in a cool glow. The piece is designed to emphasize a swinging good time, and it accomplishes that mission. Ramiro Olaciregui stretches out with an interesting solo that swings naturally.

Visit Greg Hopkins and Berklee College of Music on the web.

About The Berklee Concert Jazz Orchestra