Enrico Rava Quintet: The Words and the Days 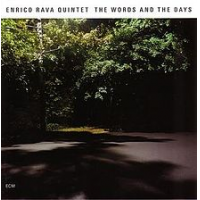 For some, jazz is an either/or: either it's deeply and clearly rooted in the American tradition, or it isn't jazz. What's not necessarily apparent with musicians seemingly distanced from that tradition is that it's an artistic choice that shouldn't be viewed as a lack of familiarity with the music's roots. Italian trumpeter Enrico Rava has spent a lifetime proving that jazz is an inclusive, rather than exclusive art form. There's plenty of room in the music for a broader view, something Rava makes clear on The Words and the Days.

Rava's quintet, last heard on Easy Living (ECM, 2004), remains intact with the exception of pianist Stefano Bollani, who left the group to more actively pursue his own career (and whose Solo Piano is being released by ECM on the same day). Andrea Pozza may be the quintet's newest member, but he feels right at home: a player with an elegant touch and spare yet multifaceted approach.

The chemistry of the quintet is unmistakable, especially on the ten-minute "Secrets," where the ebb and flow of Rava's solo highlights the group's effortless synergy. As in tune as the entire group is, the evolving relationship between Rava and trombonist Gianluca Petrella is most notable. It's not just in the nuanced delivery of the written parts, it's the way they support each other in a more spontaneous fashion that's both unexpected and ultimately inevitable.

The album opens in a space that some might characterize as stereotypically ECM. Spacious, and with pristine clarity? Yes, and with no small amount of European classicism. But while the surfaces are smooth and the edges round, Rava's characteristically warm tone is broken up occasionally by a harsher rasp. He may lean towards lyrical simplicity, but he's equally capable of energetic bursts that reference his early days in the free jazz community.

Most of the tunes belong to Rava. Bassist Rosario Bonaccorso contributes a dark bass solo, "Sogni Proibiti," while the balladic "The Wind" is a surprising contribution by smooth jazz fixture Russell Freeman; here Rava finds a good tune in the most unlikely of places.

Rava's "Echoes of Duke" breaks up the album's more atmospheric first half: still elegant and delicate, but with a stronger sense of swing. It foreshadows three later tunes, beginning with the late trumpeter Don Cherry's "Art Deco," which form a triptych, combined with drummer Roberto Gatto's "Traps" and Rava's "Bob the Cat," where the ensemble not only directly references the American tradition, but specifically its early New Orleans roots. Still, following Gatto's solo on "Bob the Cat" things return to impressionistic territory with the temporal elasticity of its final theme, the perfect segue to the album's closer, "Doctor Ra and Mr. Va," which brings things full circle.

The beauty of The Words and the Days is its ability to both delineate and assimilate approaches that some feel must be kept distinct and separate. Few albums demonstrate the continuum of jazz so well, making this another addition to Rava's already full list of musical milestones.