Jaco Pastorius Big Band: The Word Is Out

By Woodrow Wilkins
April 5, 2006
Sign in to view read count 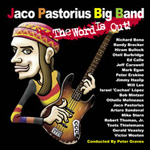 When Word of Mouth Revisited came out in the summer of 2003, I predicted it would hold up as the best new jazz album of the year. I'll make no such claims for The Word Is Out. It's already trailing Spyro Gyra's Wrapped in a Dream, Janis Siegel's A Thousand Beautiful Things and Steve Khan's The Green Field. However, in a head-to-head comparison, The Word Is Out beats its predecessor by a nose.

Once again, conductor Peter Graves has brought together the Jaco Pastorius Big Band with a stellar cast of guest musicians. It's a stunning followup to the 2003 tribute to the man who revolutionized the electric bass. Beginning with his solo debut in the mid-1970s and through his work with Pat Metheny, Joni Mitchell, Weather Report and his Word of Mouth bands, Pastorius singlehandedly shattered the boundaries of the electric bass and redefined its role across all genres of popular music.

Featuring several bassists who appeared on the earlier record, The Word Is Out is just over an hour's worth of big band jazz, a la Jaco. Seven of the eleven tracks were written by Pastorius, one by Metheny, and two medleys pair Pastorius compositions with songs by Herbie Hancock and the Beatles. The band is supported by such talents as Peter Erskine (drums), Bob Mintzer (tenor sax), Randy Brecker (trumpet) and Hiram Bullock (guitar). And while the band provides the melody and most of the solos feature other instruments, the bass lines are what make this album worthy of Pastorius. Filling the role are 2003 alums Gerald Veasley, Richard Bona, Victor Wooten, Jimmy Haslip and Jeff Carswell. Israel "Cachao Lopez Jr., Mark Egan, Oteil Burbridge and Will Lee also contribute.

The album grabs you right off the bat, with Veasley providing the licks on "Dania, complemented by Mintzer, Brecker and Erskine. Pastorius used the piece as a set opener in the mid-1980s, but he never officially recorded it. "Cannonball, penned by Josef Zawinul for Weather Report's Black Market, is a tribute to Zawinul's former bandleader, Julian "Cannonball Adderley. It was Pastorius' first recording with Weather Report. Featuring Bona, Mike Stern on guitar, Ed Calle on tenor sax and Billy Ross on soprano, this nine-minute cut is arguably the best on the album. It goes through several stages as Bona and the band shift gears from overdrive to leisurely cruise. Calle's blistering solo is the highlight. And when it comes to blistering, things don't get much hotter than Calle's soprano sax on "Three Views of a Secret, which first appeared on Weather Report's Night Passage.

For the closer, "Reza, Graves extracted Pastorius' performance from a 1982 live recording and recorded the whole band around it, similar to Natalie Cole's "Unforgettable duet with her deceased father, Nat King Cole. This superheated piece is a fitting end to an already sizzling recording.

Title: The Word is Out | Year Released: 2006 | Record Label: Heads Up International