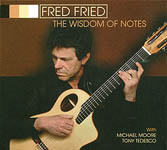 On the aptly named disc The Wisdom of Notes, guitarist Fred Fried finds plenty of wisdom in his discourse as he expounds on the extensions that his 7-string instrument provides. He is quite comfortable improvising on a melody, but the harmonic patterns that he extrapolates on his guitar provide the real meat of this outing.

Fried has chosen his tunes wisely. They give him nooks to swing or show off the mastery he has at his fingertips. And he arranges his songs to effectively bring out a wide spectrum of sound. He settles into a welcoming "With A Song In My Heart, which swings in as he expands the notation on the head and then moves into a flowing linear movement, effectively capturing the glow of the tune. Drummer Tony Tedesco is solid beneath, a flexing player who adds to the becoming narrative.

On "The Wisdom of Notes, Fried dwells on his harmonic technique. He paints subtle shades, using an occasional daub of emphasis to deepen the hue. Having established command of that territory, he jumps into the melody with a broad and bright palette. His quiet eloquence finds a companion in bassist Michael Moore, who activates an empathic energy. "Seesaw comes in on a slow ride as Fried opens the composition, unhurriedly letting the notes flow over and toward the listener. When the rhythm section joins in, it's transformed into a lively, exuberant tune that becomes utterly irresistible.