By John Kelman
September 17, 2006
Sign in to view read count 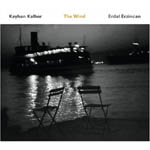 Improvisation isn't strictly the purview of jazz, although it's certainly one of the genre's defining foundations. But it's also an area of fertile exploration for artists operating far outside its conventions. Iranian kamancheh (spike fiddle) player Kayhan Kalhor has been exploring the improvisational possibilities at the nexus of Persian and North Indian music for nearly a decade with his cooperative group Ghazal. With The Wind he forges a new musical relationship with Turkish baglama player Erdal Erzincan and divan baglama player Ulaş Özdemir for a set of improvisations, this time at the nexus where Persia and Turkey meet.

The baglama, or saz, is an oud-like instrument with a longer neck and seven strings divided into two pairs and one set of three. The divan baglama is a bass saz typically used to create a harmonic foundation—a tradition perpetuated through Özdemir's role during this hour-long continuous performance. The disc is broken into twelve tracks that signal shifts in direction, but The Wind is really best absorbed as a whole. Kalhor and Erzincan orbit around the Persian and Turkish music that's at the core of these improvisations, creating the magic that distinguishes this recording.

The kamancheh has a deeper resonance that's closer to a viola than a violin. "Part 1 begins with Erzincan alone, but when Kalhor gently enters, he lends the kamancheh a vocal quality that's nothing like its Western cousins. While Kalhor has a background in improvisation, Erzincan's roots are more purely traditional. Still, he adapts remarkably well to Kalhor's concept, remaining responsive but equally suggestive. The bulk of "Part 1 is clearly improvised; only towards the end of its nearly six minute duration do the two players come together for a defined folk melody.

The mood shifts throughout the disc, and time is often elastic. "Part II shift from free time to a more insistent rhythm, but the seamless way in which Kalhor and Erzincan achieve it speaks to an almost telepathic connection between them. While Khalor's personal association with Erzincan began years ago with trips to Turkey to research the music, the speed with which their musical partnership has reached such a deep and intuitive level is remarkable.

That centuries-old music can be grist for a modernistic improvisational approach which nevertheless feels steeped in antiquity is what makes The Wind so compelling. Between Ghazal and this first collaboration with Erzincan, Kalhor has positioned his own musical tradition in the center of a larger geographical and musical context. With the current political instability in that part of the world, The Wind proves that it's possible for music to transcend such concerns and, perhaps, provide a glimmer of hope.