By Eyal Hareuveni
April 18, 2014
Sign in to view read count
Japanese vocal artist Koichi Makigami's main musical vehicle has been his band Hikashu since the late seventies. This band embodies Makigami's colorful eclectic tastes and myriad vocal personalities. They succeed in tying together eccentric collective improvisations, Japanese theater traditions or elements from Japanese films and pop songs, references to progressive rock and wild, virtuoso vocal acrobatics. Hikashu's 21st album Bankan and the following EP Chakra Biraki [Chakra Opening] show that when it comes to Makigami and Hikashu, you can only expect the unexpected, but you are guaranteed to have tons of fun. 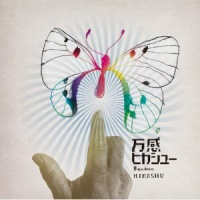 Bankan is a collection of songs rehearsed and road tested before Hikashu recorded them in New York and Tokyo. It features the band as a tight, highly collaborative unit, especially the impressive guitar work of Mita Freeman and commanding drum work of Sato Masaharu. Hikashu is always open to embrace Makigami's surprising, wild acts.

The short songs are humorous and theatrical, taking the concept of alternative pop songs as far and as absurd as can be imagined. Hikashu storms in immediately with the driving "Eye and the Net," featuring Makigami's dramatic delivery alternating between a macho character and bizarre, childish vocals riding on a thick, energetic horn section. Makigami continues with theatrical phrasing on "Is that It, Or Not," "If And If" and "A Miserable Puppet," adopting a philosophical delivery inspired by tormented, not-so-balanced figures from traditional Japanese theater. On "Chicken Fly" Makigami even assumes the role of a grown-up chicken and proves that that chickens can also have fun, especially if their bands play surf rock. On "The Color Of Prayer," Hikashu develops an intoxicating, rhythmic dance.

Improvised pieces emphasize Hikashu's versatility and breadth of vocabulary. "Nabokov's Butterflies" is an eccentric improvisation, devised after visiting Nabokov Museum in St. Petersburg, where Nabokov's butterfly collection is exhibited. The song is comprised of a series of vocal acrobatics and adventurous, searching interplay that reflects the band's moods and memories from their visit. "Sprouting Up," written by drummer Sato Masaharu, is an ecstatic piece, shifting abruptly between beats and free improvised segments that challenge the musicians—including Makigami in a possessed performance—to follow Masaharu's muscular, fast drumming. "Rehumanize" highlights Makigami's amazing vocal spectrum and unique ability to populate several personalities, extraterrestrial and earthly ones, often quite schizophrenic ones; at any given moment without losing the sense of storytelling in such a weird collection of identities. "With That Intention" features Makigami's vocals through the shakuhachi flute. That brings to mind the Dutch prog-rock band Focus and singer/flutist Thijs van Leer.

A wild, uplifting ride closes with "With That Intention," classic rock based on power guitar riffs and Makigami's highly dramatic delivery, full of pathos and fleeting bursts of wild humor. 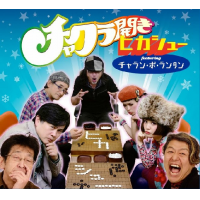 The first two songs in this EP feature the sisters Charan Po Rantan--- Chiaru on button accordion and Momo on vocals—who, much like Hikashu, have eclectic tastes. This duo mixes klezmer melodies, French chansons and songs from classic American films into uplifting, sweetly energetic performances. They have collaborated on stage with Hikashu since 2010 but this is their first recording together. "Glimpse to Heaven," where Makigami and Momo share vocals, is a twist on a traditional Christmas song. It tells the story of Santa Claus, but their joyful delivery somehow obscures a tragic conclusion, i.e. Santa Claus never reaches his earthly destination and finds himself in heaven. "The Song of Mothra," taken from early sixties monster movies, features Charan Po Rantan as the luminous fairies from the beginning of the film.

"No Good?!" is an absurd improvisation, part of Hikashu's live repertoire since the eighties. This is it's first official recording. It features Hikashu in a psychedelic mood, halted only for the Japanese shouts of the song's title, "Damekana?!." The album's title song continues the collective improvisation, this time as a more relaxed extension featuring Makigami's imaginative use of the theremin, reciting only a brief promise to open the listener's chakra. Only in its final seconds is found the confession that such a drastic promise is wrapped in many difficulties. The last song, "Yellowish Bandana," is leftover from the Bankan sessions. It is playful, based on Japanese wordplay and a loose connection to Ornette Coleman's harmolodics concept, spinning Coleman's Prime Time aesthetic into an uplifting pop format.

Tracks: Me To Me No Net [Eyes And The Net] ; Nanoka Douka [Is That It, Or Not] ; Nabokofu No Chou [Nabokov's Butterflies]; Niwatori Tonda [Chickens Fly] ; Inori No Color [The Color Of Prayer]; Nyuki Nyoki Haetekita [Sprouting Up]; Ningen Ni Kaeritai [Rehumanize] ; Moshi Moshi Ga [If And If]; Mijime Na Puppet [A Miserable Puppet]; Mienai Kankei (Juden Shiteru) [Invisible Relationship (It's Charging)]; Sonotsumori [With That Intention].