Bobby Broom: The Way I Play 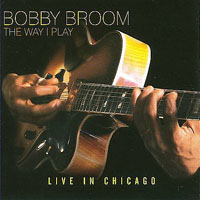 Guitarist Bobby Broom could have easily taken a different musical direction when he released the popular contemporary/funk jazz album, Clean Sweep (GRP) in 1981. But with his early influences, guitarists Wes Montgomery, early George Benson and mentor/saxophonist Sonny Rollins, he has developed his own unique style on recordings such as Song and Dance (Origin, 2007). This voice is heard in a live setting on The Way I Play , an uncut, as it went down performance, as Broom states ..."it really is a record of how I approach my instrument."

Joined by longtime members, bassist Dennis Carroll and drummer Kobie Watkins, the recording is a taste of the weekly gig the trio has held for the past few years at Pete Miller's Steakhouse in Evanston. It also mirrors Broom's other live trio recording, Deep Blue Organ Trio: Goin' To Town—Live At The Green Mill (Delmark, 2006).

Broom's approach is a lesson in soulfulness, lyricism, and an innate sense of timing and swing, that goes beyond academics. Carroll and Watkins do more than keep things tight rhythmically; they are integral parts of the vibrant trio connection, through interaction and individual performances.

This is an entire album of "OPM" (Other People's Music)—standards from the Gershwin Brothers, Rogers and Hammerstein, et al. But it's the way that the trio approaches and interprets these classics that keeps them fresh: the retelling of Charlie Parker's "Donna Lee," each player delivering passionate solos and quick trades; or the lovely "Fly Me to the Moon," where Broom sets up the melody with a nice intro, leading into a purposed mid-tempo groove.

The execution of a good ballad can be difficult, but Broom's tone and phrasing, as well as artistic touch, are simply exquisite on the trio's redo of "Body and Soul." The "cool" factor is strong on the swinging "Unit 7" with Watkins' colorful trap-work getting the spotlight on some heavy trading with Broom.

Things end nicely with McCoy Tyner's "Inception." Broom plays some Django-like chords at the onset, with Carroll's bombastic bass walking and solo and another wonderful drum spot from Watkins. One audiophile criticism that comes with the territory of this unedited performance is found in the sound quality, which includes some minor crowd noise and the tinny treble from Watkins' cymbals. But in no way does it detract from this wonderful document of live jazz by one today's most authentic jazz guitarists.

Strike Up the Band; Donna Lee; Fly Me to the Moon; Airegin; Body and Soul; Unit 7; The Surrey With the Fringe on Top; Inception.