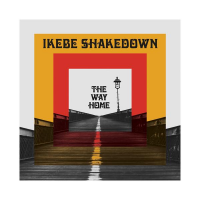 Ever since I heard their debut in 2009, Ikebe Shakedown became one of my favorite bands. There's nothing I love more in music than funky grooves, powerful percussion and bold brass. Ikebe Shakedown does all-instrumental, percussive, brassy Funk as well as anyone else on the scene these days.

Their 2017 record, The Way Home on Colemine Records, intrigues, stimulates, and blows the mind while shaking the hips.

The Way Home finds Ikebe Shakedown using the above described foundation again. And, this time they add more echoey guitar, far-out cinematic Soul, and spine-tingling arrangements to the mix.

"Supermoon" starts the album off on a high note. The horn section sets the stage for a thrilling ride, and the rhythm section jumps in to bring the heavens closer to earth.

"Blue Giant" reminds me of an Isaac Hayes instrumental updated for 2017 because it overflows with soul, and has killer breaks. One of the things that stands out for me about The Way Home is that the guitar playing is more prevalent on this album. You'll hear it in full effect on this tune with soulful chords, just enough wah-wah, as well as a little Rock-style jamming.

"The Next 24" is one of the funkiest songs on a remarkable record overall. Ikebe Shakedown's smoking hot horn section and potent percussionists always dazzle, and on this tune the guitar shines with a mixture of heavy wah-wah, and funky strumming.

"She's Knocking" is a cinematic Soul slow burner. It's like the unrequited love scenes from a quirky movie. The moody piano and sad brass eventually give way to happy horns, and the quiet guy getting the girl.

"Assassin" gets the band back to its pure Funk groove. The conga clomps along, and sets up a superb saxophone solo, while never leaving the percussive pattern that holds the tune together.

"Brushfire" is all about the guitar—plenty of echo, fuzz & tremolo effect give it vast space, and remind me of Spaghetti Western soundtracks.

"Penny The Snitch" continues with the same vibe, and this time the horns join in to propel the tune in between heavy wah-wah jamming and resounding reverb guitar.

A weeping willow of a wah-wah leads into "Out Of The Shadows." This is the part in the movie where the cool killer comes out of the shadows to kick some ass, and then saves the day.

In the quirky Jim Jarmusch movie that never was, for which The Way Home could be the perfect soundtrack, "The Ally" is the part when the cool killer meets up with his better half, and they go on to new adventures, setting up a sequel.

"Shifting Sands" continues into the provocative, reverby guitar territory we've been enjoying so far. Here, the world-class rhythm section & conguero lay down a dope beat for the horns to soar away on.

"Five For Five" is anthemic & awesome, moody & magnificent. It's an emotive exercise for all the band members, and a dramatic descarga.

I'm adding in their 2017 single, "Curitiba Strut," on Transistor Sound, because it could have easily made this record too. Its perfect drum & bass groove, happy horns, playful percussion, and far-out synth line make you want to dance yourself all the way to Brazil! It's my favorite instrumental Funk song of 2017.

The Way Home shows how the band's style has continued to evolve, with material that transports listeners beyond their living rooms into dance parties and spaces for introspection. Defying genre or classification, this album proves Ikebe Shakedown is helping define the next bold and soulful wave in instrumental music.

Supermoon; Blue Giant; The Next 24; She's Knocking; Assassin; Brushfire; Penny The Snitch; Out Of The Shadows; The Ally; Shifting Sands; Five For Five; Where The Day Breaks

I love to write about all kinds of eclectic, funky music from around the world.