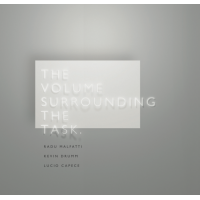 The Volume Surrounding the Task was recorded live at Q-O2 in Brussels in January 2011 during a tour of France, Belgium and Switzerland by the international trio of Argentine-born Berlin resident Lucio Capece on bass clarinet and preparations, Chicago-based Kevin Drumm on electronics, and Austrian trombonist Radu Malfatti. The music consists of the unbroken title track which lasts over forty minutes and may well have been an entire set.

The three players work well together as a trio, Capece having recorded before with both Malfatti (notably on an album for the Austrian's own B-Boim label), and with Drumm in the quartet that produced the LP Venexia (Pan, 2012). Here, the three sound comfortable in each other's company, their time together on tour being clearly evident. They do not obviously call and respond to one another, instead adopting a more laminal approach with the sounds of the three being carefully overlaid so that they do not mask each other. There is hardly any clutter, and every sound can be clearly heard from its beginning to its end.

The album's signature sound is the ebb and flow of sustained bass clarinet notes, their depth and richness giving human warmth to the soundscape that is very easy to surrender to and luxuriate in. Malfatti's trombone tones are just as prolonged, and effectively fit in with the clarinet; entertainingly, at times when the two are overlaid, they can sound like large sea mammals communicating. In classic eai style, Drumm's electronics underpin and provide a contrast to the acoustic instruments; the boundaries between electronic and acoustic sometimes become blurred, with some sounds even being ambiguous enough to be attributable to any of the three.

Some commentators have suggested that the album has a lack of volume or long periods of quiet—maybe they were triggered by the album title's inclusion of the word "volume." Anyway, such comments are not borne out by the music on the album; crucially, throughout the track at least one of the three is playing at any time, save for just six seconds of silence at around the twelve-minute mark. In common with other recordings, particularly eai, this record can be a chameleon, sounding markedly different on different platforms, especially because different low-frequency responses affect the audibility of the bass clarinet and trombone. But, having been heard on a variety of platforms (including hi-fi, portable CD-player, laptop, iPod, and YouTube—see below) over the course of a month, this recording can be judged a first-rate example of the eai genre. Hope to hear more from this trio in due course.

The Volume Surrounding the Task.