Moondog: The Viking Of Sixth Avenue 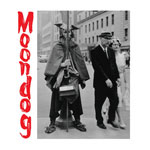 While many modern music fans have heard of Moondog—his counterculture reputation and musical achievements have been celebrated by hipster and conservatoire musicians alike for over fifty years—relatively few have actually heard his music. Acquainted with and endorsed by Charlie Parker, Lester Young, Igor Stravinsky, and Artur Rodzinski in New York in the late '40s and '50s, and by Janis Joplin, Frank Zappa, Steve Reich, and Philip Glass in the '60s and '70s, his most recent high-profile champion has been Elvis Costello, who booked him for London's Meltdown Festival in '95.

Moondog lost his sight in an accident at age sixteen, and his musical development was accelerated at various schools for the blind. He moved to New York in '44 and took the name Moondog (he was born Louis Thomas Hardin) in '47. Around this time he also adopted full-on Viking dress—to disassociate himself from Christianity, he explained—and began playing his tunes on the streets of New York. The streets remained his preferred performance platform throughout his life.

Moondog's music is simple and almost childlike—in the best sense of the word, naive. Most of these tracks, melodically attractive and rhythmically virile, last little more than two minutes, providing brief expositions of rhythmic or textural ideas. Having put an idea forward, Moondog rarely shows any interest in developing it, preferring to move on to another thought. Even the closing "Invocation," at ten minutes by far the longest track on the album, recorded at the Meltdown gig and featuring a full-blown symphony orchestra, is a sixteen-part canon which simply repeats the same low A throughout. Apart from "Invocation," "Lament 1 - Bird's Lament," and "All Is Loneliness," most of the tracks are overdubbed, with Moondog playing all the instruments.

This wonderful anthology, packed with rare-as-hens'-teeth recordings, spans Moondog's output from '49 to '95, focusing primarily on his prolific '50s output. Several labels are sourced, including Moondog's own eponymous imprint and Woody Herman's Mars, as well as Brunswick, Prestige, and Folkways. Two tracks come from his '70 Columbia album (he'd been signed at Janis Joplin's urging): the madrigal "All Is Loneliness," which had been covered by Big Brother & The Holding Company on their debut album; and "Lament 1 - Bird's Lament," composed in memory of Charlie Parker and one of Moondog's signature tunes.

Moondog's period in the counterculture spotlight in the early '70s brought him a brief taste of fame, but no fortune. He remained true to his roots and his principles, and celebrated his newfound status as a Columbia recording artist by moving his street pitch to the pavement opposite the label's plush Manhattan headquarters.

In the mid '70s, Moondog moved to Germany, where he continued playing and composing up until his death in '99. The world is a better place for his music, and if you haven't heard any of it yet, this rich and beautiful collection is the perfect place to start.

Theme And Variations; Down Is Up; Bumbo; Big Cat; Oo Debut; Lament 1 - Bird's Lament; Moondog's Symphony 1; Moondog's Symphony 2; Rabbit Hop; Rimshot; Snaketime Rhythm; Instrumental Round; Double Bass Duo; Why Spend The Dark Night With You?; All Is Loneliness; Snaketime Rhythm; Dragon's Teeth; Oboe Round; Be A Hobo; Dog Trot; Oasis; Avenue Of The Americas; 2 W 46th Street; Lullaby; Fog On The Hudson; Utsu; On And Off The Beat; Chant; From One To Nine; Improvisation; Enough About Human Rights!; Viking; Rimshot; Chaconne In G Major; Oasis; Invocation.