The Vaché Brothers Quintet At The Jazz Corner 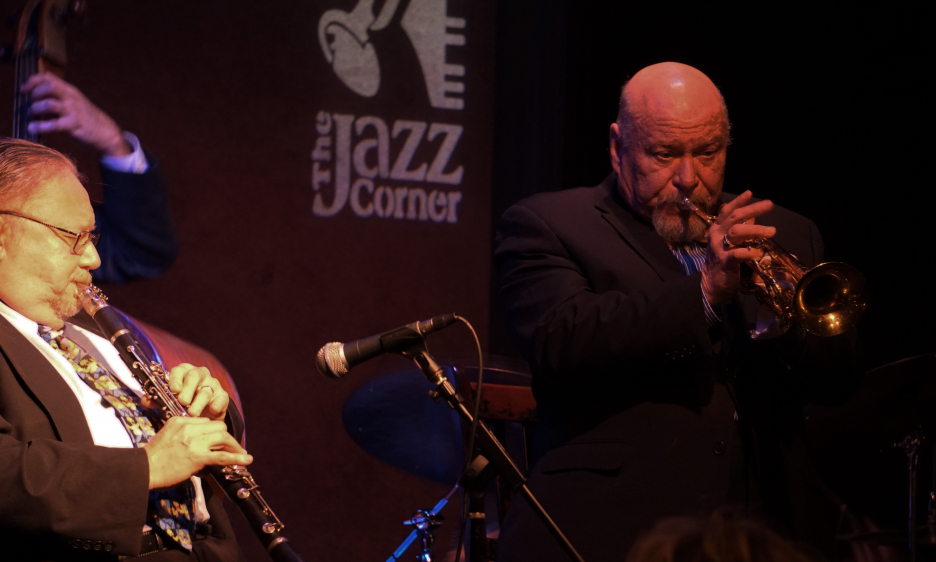 Brothers, Allan Vache and Warren Vache, brought their quintet, their dry wit and, their brotherly banter to The Jazz Corner for their annual visit. Allan played clarinet in the style and with an attack reminiscent of early Benny Goodman, with whom he played as their careers briefly overlapped. Allan reached up for pure, clear notes on clarinet, which he hit and held. For all their vaguely competitive banter, Allan demonstrated his fraternal respect while introducing his elder brother Warren as "the best trumpet player of ballads anywhere." Almost breathless, quiet passages from Warren confirmed the opinion, the soft trumpet, barely blown, still hit every note unwaveringly. Warren stated a preference for cornet or flugelhorn finding it easier to make the rounder sounds brighter, rather than to make the trumpet sound softer.

They started with "On the Sunny Side of the Street" (written by Jimmy McHugh, 1930). After the applause, they welcomed to the audience an old friend in music, Mr. Bob Alberti, who for twenty years was Bob Hope's musical director and pianist on his popular television variety show. Next, came a slow Mayfair song. Mayfair, a wealthy district of London, describes a 1930s genre of music by English ballad composers, which included such tunes as "A Nightingale Sang in Berkeley Square." The Vache' brothers selected "These Foolish Things" (Remind me of You) written by Jack Strachey, in 1936.

Warren was dapper in a bowtie, Allan carried an elegant black Malacca cane. Both brothers sporting trimmed beards, left the stage from time to time, returning separately or together. The coming and going added movement to the performance. They sometimes abandoned the rhythm section on stage leaving them to play as Warren described "Unconfused by the clarinet and untroubled by the trumpet." The presence of the brothers seemed to be everywhere as they moved around the darkened room. They ended the first set with Duke Ellington's "Take the 'A' Train" co-written with Billy Strayhorn. Sparkling solos and sections played in unison, were split when Warren led on trumpet and Allan wove a line in counterpoint high above the melody on clarinet.

The second set was described by Allan as the "just" set. They started with "Just you, Just me" ( from the film Marianne, written by Jesse Greer, 1929) and moved on to Duke Ellington's 1941 tune "Just squeeze me" (but don't tease me). They played an excellent "Three Little Words" (Duke Ellington, 1930, original singer: Bing Crosby). "Angel Eyes" followed, then on to "Time after time"(written by Jule Styne, 1946). Allan led the band into each piece, counting off the tempo. The brothers were continually communicating in signs or snatched words in what Allan described as instant arrangements.

This was a classy, unhurried performance. Not perfunctory in any way, it was thoroughly assured. They played standards with flashes of brilliance, mild eccentricity and relaxed competence. There was no hardship at all involved in listening to the Vache' brothers weave their magic.