The Toy Killers: The Unlistenable Years 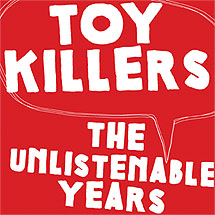 Thomas Jefferson once said, "Every generation needs a new revolution." Indeed it does. As it may be up to you to put an end to the proliferation of American Idol/High School Musical idiots, lessons of history might just serve you well. As such, The Unlistenable Years, containing found music by the duo Charles K. Noyes and Mark E. Miller—known as Toy Killers—is a great rough draft of the New York No Wave revolution of the late 1970s and early 1980s

In clubs including Chicago's No Exit, New York's The Kitchen, or Columbus, Ohio's Crazy Mama's, music was being reinvented. Call it punk, no wave, or free improvisation, musicians—and audiences—craved a new sound; actually, an old sound—as a pure experience—such is the primitive nature of the music found on The Unlistenable Years.

The prime movers and shakers of this new century's music can be found in the paths of Miller and Noyes here: Arto Lindsay, John Zorn, Bill Laswell, Wayne Horvitz and Elliott Sharp. But in the early 1980s, these musicians were more iconoclasts than icons. And the music is as rough as the rebellion it spurred.

The disc was edited, remixed and mastered by composer/multi-instrumentalist Weasel Walter, and is organized around two sections. Roughly half are comprised of seven improvisations, and half are compositions. Whereas the improv pieces are seemingly timeless, tracks like "Sex Carp" could easily be the incorrect answer ("what is DNA?") to a Jeopardy game show question. But then, Arto Lindsay's exorcist vocals and torn guitar lines are still amazing. Certainly, fans of Bill Laswell, Elliott Sharp and John Zorn can identify their heroes' sounds here.

Listening to these artists at their musical infancy is not so much a revelation, but a reaffirmation of thoughts, back in the day, that this generation required a revolution. Perhaps some accord and recognition to Miller and Noyes can now be afforded.

About The Toy Killers