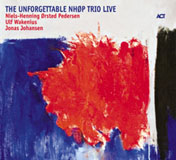 Like the British pianist Stan Tracey, the Danish bassist Niels-Henning Orsted Pedersen served a lengthy apprenticeship accompanying US stars playing the European club circuit. In the 1960s in London, Tracey was the pianist in the Ronnie Scott Jazz Club's house band, while Pedersen held down a similar gig at Copenhagen's Montmartre Jazzhus. Tracey and Pedersen benefited greatly from the experiences—as did the US tourists, most of whom were quick to recognize both men's world-class talents.

Tracey abandoned back-up work in the late 1960s, to concentrate on his own band leading and composing. At 81, he's still going strong. Twenty years Tracey's junior, Pedersen passed prematurely in 2005. A strong time-keeper and inventive improvisor with a gorgeous, singing tone and a technical facility more akin to that of a guitarist than a bassist, he spent many of his post-Jazzhus years touring and recording with pianist Oscar Peterson. But from the mid-1990s, Pedersen too focused on leading his own bands, in which guitarist Ulf Wakenius, who played alongside him in the Peterson trio, and drummer Jonas Johansen—his colleagues on The Unforgettable NHOP Trio Live—were regular players.

This disc is taken from two NHOP Trio radio broadcasts, in Denmark in 1999 (tracks 1-5) and in Germany in 2005 (tracks 6-11), the latter just a few weeks before Pedersen's final heart attack. While not perhaps the album for which the bassist will be best remembered—for that, my vote would go jointly to Those Who Were (Verve, 1996) and This Is All I Ask (Verve, 1997), two sextet sessions featuring, respectively, saxophonists Johnny Griffin and Phil Woods—it contains moments of magic intense enough to melt the heart.

Two tracks, each about seven minutes long, leap out from the 1999 recording—Wakenius' "Lines, a fierce boppish head-charge, and the sublime standard "A Nightingale Sang In Berkeley Square," its theme stated softly and slowly before it explodes into extrovert double and quadruple-time solo sections. Pedersen's lovely bass lines distinguish both tunes, and he solos magnificently on "Berkeley Square," his melodic fecundity unimpeded by the furious pace. Almost as good, and with similar playing times, from the 2005 recording, are Charlie Parker's "My Little Suede Shoes," itself a fairly generic neo-calypso written by the saxophonist for his album South Of The Border (Verve, 1952), and George Gershwin's caressing "Our Love Is Here To Stay." Pedersen's bass states most of these themes, as it does those of two lovely Scandinavian folk tunes, "I Skovens Dybe Stille Ro" and "Jeg Gik Mig Ud En Sommerdag," from the second concert.

The 2005 recording was made only a few weeks before Pedersen's final heart attack, yet there's no intimation of it whatsoever in his playing, which sounds like he hasn't a care in the world. The feeling is contagious.

The Bach Piece; Memories; The Song Is You; Lines; A Nightingale Sang In Berkeley Square; You And The Night And The Music; My Little Suede Shoes; NHOP Spoken Word Presentation; I Skovens Dybe Stille Ro; Jeg Gik Mig Ud En Sommerdag; Our Love Is Here To Stay.