Chick Corea: The Ultimate Adventure: You Can't Return to Forever 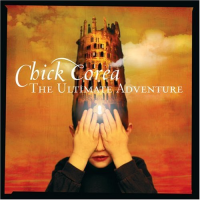 The Beatles are gone. I know that. But I keep thinking if I buy just one more Paul McCartney CD, maybe the old magic will return.

Maybe. But it never does.

Chick Corea does that to me, too.

I came to jazz through Chick Corea—through the back door. I discovered jazz indirectly. It began with the rock bands Chicago and Emerson Lake & Palmer. With Chicago, it was the horn section. With ELP, it was the synths. ELP led directly to Chick Corea and Herbie Hancock and, yes, I confess, even "Switched on Bach."

So I discovered "Return to Forever" and "My Spanish Heart" and "Light as a Feather." That led me to acoustic Chick, including one of my very favorite jazz records, his two-piano duets with Herbie Hancock. Not only is it great music, but it reminds me of a very happy time in my life. Just like Paul and the Fabs.

But then years passed. Chick Corea put out more albums. Some were good, some were so-so, but none seemed as good to my ears as the Chick Corea of old.

Then a few years ago I heard on the radio cuts from a new Chick Corea album, "The Ultimate Adventure." It sounded just like old Return to Forever! The magic was back! I had to have it! So I bought it. And now, after years of repeated listening, I have to admit: It's good, but not classic.

There are moments. Complex rhythms. Flightly flutes. Middle Eastern motifs. Latin tinges. Both piano AND synths. But no memorable melodies. I know I shouldn't, but I can't help comparing it to 1970s Chick. And while I enjoy it, it's not the same. Maybe it's unfair to think it would be.

So it's OK to enjoy a new Paul McCartney CD now and then, but I never fool myself into thinking the next one will be "Rubber Soul." Unfortunately, I did fool myself for a little while about "The Ultimate Adventure." It's good. I like it in small doses. But Thomas Wolfe was right. You can can't go home again. You can never Return to Forever.