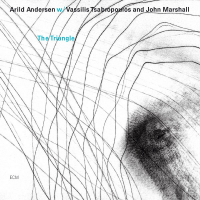 What a difference four years and touring time can make. The Triangle, the follow-up to 2000's sublime trio recording Achirana, shows a group that has grown in leaps and bounds, becoming something more, something larger.

Clearly Vassillis Tsaboropoulos, an established classical pianist whose first recording of improvised music was Achirana, has evolved. While the thrust of the trio remains in chamber jazz, his playing is more extroverted. "Straight" and the 5/4 piece "Saturday" demonstrate a new-found brightness, and expressionist approach; a far cry from his earlier, more inward-looking work. And bassist Arild Andersen and drummer John Marshall seem perfectly happy to join Tsaboropoulos in this more vivid space. Andersen's "Lines" revolves around a rapid-fire theme that settles into the most swinging interplay of the programme, with Andersen walking hard and Marshall's listening skills on high alert, following Tsaboropoulos' rhythmic twists and turns with remarkable ease.

That's not to say the trio doesn't visit more spacious ballad territory; but even on tender ballads like Tsaboropoulos' "Cinderella Song" and "Simple Thoughts" there is a rich vibrancy, a stronger sense of urgency. As auspicious a début as Achirana was, and it was arguably one of the best trio recordings of 2000, it was somehow more tentative, and far more abstract. There is a refreshing directness about The Triangle that highlights a trio that has truly come into its own in the intervening years.

Much of this has to do with Tsaboropoulos' growth as an improvising player; Andersen and Marshall both have long histories of working in a variety of contexts, so their ability to meld to any stylistic change comes as no surprise. Tsaboropoulos still demonstrates a penchant for playing over the bar lines, creating long, snaking themes that develop over time. And, while his melodies can be complex, they are always lyrical; there is nothing abstruse in his ideas.

Tsaboropoulos has also grown as a writer. The simple repeating motifs of Achirana have been replaced with deeper harmonic ideas that unfold gradually and, rather than being bare sketches, provide the trio with forms that are more substantial. The result is a recording that, while it clearly is rooted in the overall musical concept of the first, shows remarkable evolution. While growth is a characteristic that all good ensembles demonstrate, it is not often that it is this overt, this palpable.

The Triangle's title refers to the fact that Andersen in Norway, Marshall in England, and Tsaboropoulos in Greece form a European triangle of musicians. But even more, it refers to a group where each point is as important as the others. And clearly this triangle is an equilateral one, where every side is equal, every player as important as the next. Demonstrating that the growth of one player can spur the entire ensemble to greater heights, The Triangle will surely follow Achirana as one of the finest piano trio recordings of this year.