By DAN MCCLENAGHAN
March 7, 2019
Sign in to view read count 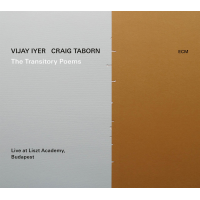 The seed that started The Transitory Poems, the two piano set from Vijay Iyer and Craig Taborn, was planted in 2002, when the two pianists played in saxophonist Roscoe Mitchell's band, Note Factory, contributing to Song for My Sister (Pi Recordings, 2002). At that time Taborn and Iyer fell into the "exciting young lions" category, and the experience with Mitchell was certainly formative for both. In the year 2002 Taborn boasted only two albums (as a leader) to his name. Vijay Iyer clocked in at the same count. Two guys with interesting, avant-garde approaches who might, or might not, take off. Upcoming artists with lots of promise.

They took off. Promises have been fulfilled. Since 2002 Iyer has released an album or two a year, under his name—for Pi Recordings, Sunnyside Records, Act Music—in addition to three albums as a leader for ECM Records and one a duo outing with trumpeter Wadada Leo Smith. All innovative, top quality recordings, many showing up on those "Best Of Year" lists. Taborn has been slightly less prolific—a handful of excellent outings on Thirsty Ear and Clean Feed Records—before stepping into ECM Records territory with Avenging Angel (2011), a superb solo piano outing, then a trio date, Chants (2013), also on ECM, leading into a quartet record, Daylight Ghosts (ECM, 2017).

With TheTransitory Poems the Iyer/Taborn duo pays homage to some of their influences: pianists Cecil Taylor, Muhal Richard Abrams and Geri Allen, and sculptor Jack Whitten.

"The music's in the air, and then it's gone." The disc's title seems to nod to this sentiment. The music itself does, too. Instant composing, spontaneous arrangements, a gorgeous fluidity of ideas mutating in the moment with an enchanting and lovely spaciousness. And then it's gone, unless somebody records it.

Since Cecil Taylor is mentioned first in the line of influences, it should be said that his spirit is here, not so much the in terms of his ensemble records—Unit Structures (Blue Note, 1966) and Conquistador (Blue Note, 1966)—but rather his solo piano outings like For Olim (Soul Note, 1986) and Air Above Mountains (Enja, 1977). But Iyer and Taborn's sound here is less crowded than Taylor's—even with four hands—and perhaps less intense, while maintaining a level of abstraction that somehow holds onto an extraordinary level of melodic beauty and a compelling rhythmic drift—and sometimes a crispness—and an interweaving of cohesive intentions that proves riveting.

The Transitory Poems sounds like two artists colluding in a search for solutions to beautiful mysteries, completely in the moment. That there are no solutions is beside the point. It is the search, the journey that counts. From the cryptic opener, "Life Line (seven tensions)" to the angular sparkle of "Sensorium," through the luminescent energy of "Shakedown" to the peculiar, prickly momentum of the thirteen minute closer, "Meshwork_Libation (When Kabuka Dances)," dedicated to the late pianist Geri Allen, The Transitory Poems plays out as a brilliant and flawless work of art.