The Charles Wright Trio: the time is wright . . . 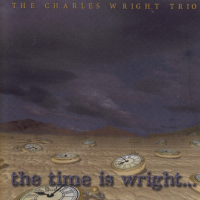 First impressions carry weight and this release hit me in that Holdsworth place in my legato-ridden head. Wright's chordal phrasing and voicing, the rhythm drive/ chord pluckings have that definite Holdsworthian touch. But after that the comparison ends. The Charles Wright Trio then sets off on its own brand of quality jazz fusion execution and song-writing.

Guitars, guitar synth, bass, and drums are played exceptionally well, tight, clean, inventively, and best of all hold this reviewer's attention due to a their novel sound. Wright sometimes leans clean in his tone like Wayne Johnson or a mellowed Mike "Sterno." I also heard echoes of the Elliot Freedman Group but then Wright goes riffing off into another unique voicing and phrasing with the grace of a Gambalesque moment. Wright has a great deal of tricks up his sleeve that serve to satisfy with Sean Peck and Mike Pryor flawlessly flowing alongside in counterpoint and unison.

My fav track overall was "Lucky Charm" with its march-like "call to battle" balladic flow. It was similar to the Dregsian side of Magic Elf in its hard-picked, funked attack, and upbeat push a.k.a. "high energy complexity." I detected flashes of Djam Karet-ish progressive rock as well. Nice cut! Need some vintage solo Al DiMeola/ Santana/ Satriani rock with plenty of that 70s fusion edge? Then be sure to cue up the outro track, "Celestial Ceremony" where Pryor gets to stretch some. My second fav cut.

Paradigm, The Time Is Wright, Change of Weather, A Day in the Sun, On the Scene, Don't Be Afraid, Conduit Place, Dream Walk, Lucky Charm, Celestial Ceremony