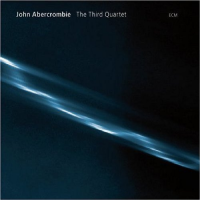 John Abercrombie's group recordings on ECM have often come in threes. The Third Quartet, his latest featuring violinist Mark Feldman, bassist Marc Johnson and drummer Joey Baron, is an apt (and obvious) title, but hopefully not a sign that this is the end of this group's winning streak. Since forming in 2000 it's evolved into one of the best—if not the best—groups of the guitarist's long career.

Abercrombie spoke, in an interview at the time of the quartet's Class Trip (ECM, 2004), of how, when he practices, he works within more traditional form. The Third Quartet is the group's best balance yet of tradition and forward-thinking ideation—and of conventional form combined with open-ended improvisational interplay. The group's relatively long history means that it's achieved a chemistry and comfort level that engenders total trust without losing the spark the drives it into new territory.

It's the first album in a decade where Abercrombie has dipped into an external jazz repertoire. "Round Trip" is delivered in an open, swinging fashion, with a powerful solo from Baron that's remarkable in its unfailing adherence to Ornette Coleman's familiar melody. The group also turns Bill Evans' lesser-known "Epilogue" into one of the most tender, ethereal and resonant ballads Abercrombie has ever recorded.

The group is as intuitive with the rubato tone poem "Number 9" as it is the gentle waltz "Vingt Six." Abercrombie has always been a master of melancholy lyricism, reflected clearly on "Wishing Bell," the album's longest track. In many ways he's the guitar alter-ego of trumpeter Kenny Wheeler, perhaps explaining why they have worked so well together over the years.

But it's the interaction of the strings—sometimes delicate, other times soaring—that defines the group's unique aesthetic. "Elvin" pays tribute to Elvin Jones with an understated swing that has all the strength of the late drummer but less jagged edges. Feldman, whose What Exit (ECM, 2006) was one of last year's best records, is emerging as the most stylistically flexible violinist in improvised music today—an elasticity shared by everyone in this quartet.

Sound can be just as important as the notes played, and Abercrombie explores a range of tones, from warm and woody to edgy and distorted—surprising choices at times, but always perfect.

The album ends with Abercrombie alone on the overdubbed dual acoustic guitar track, "Fine." It's the first time he's recorded solo since Characters (ECM, 1978)—a promise, perhaps, of more to come. Meanwhile, The Third Quartet is another step forward for Abercrombie and this quartet, as they respect and expand tradition in an undeniably personal and modernistic fashion. blank>Universal Classics on the web.